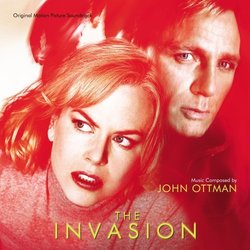 While listening to John Ottman\'s The Invasion, I had flashbacks of Elia Cmiral\'s score to Pulse. Indeed, both scores embrace the same idea: to do away with melodies and to create a sound that is a fusion of orchestral and electronic elements. These scores are not always accessible to the casual listener and usually function much better when grafted onto the visuals than on their own. The Invasion, an umpteenth retread on ideas first introduced in the 1955 novel The Body Snatchers, sees Ottman extend the scope of his musical arsenal once more: after the nobility and romanticism of his music to Superman Returns, Ottman explores the world of electronic effects and sound design. Like in Cmiral\'s Pulse, the line between the orchestral instruments and the synthetic effects is blurred to the point of non-existence: fans of electronics-heavy horror scores will delight while the old school devotees might not give this baby a second spin.

The thematic content of the score is fulfilled not by melodies but by sounds. Therein lies the interest of the score: being introduced to a novel sonic world. There is a crawly metallic sound permeating the beginning of "Escape with Ollie" that sounds like a heavily-filtered rainstick. Forty-five seconds into "All Aboard", the composer uses an interesting mixture of sounds: a slithering electric snake is superimposed on what sounds like a distorted whale call, before a loud, synthetic, amplified gong sound interrupts the suspense, followed by electronic flickering sounds coming from everywhere at once. "Hit and Sit" features a warped, rubbery sound, what heavily-filtered screaming brass instruments might sound like. And "Subway / Blending In" features what can only be described as a computer-assisted meltdown: intense brass glissandi, recurring pounding, rising violins, electronic chimes, and retro synthesizers. In the middle of this otherworldly assault, the orchestra comes and goes, fading in and out, matched by its electronic counterpart, and functions as just one more element of this alien tapestry.

The Invasion is not an easy score to enjoy on album. Its hooks are purely aural and its appreciation can only be cerebral. I actually found the most enjoyable track to be the first one, "Life Goes On / Dance of the Cells", a piece crafted for an afterthought—an animated end title sequence depicting a virus invading cells. Its modern mixture of warped electric piano, simple synth bass line, wet electronic sounds, and constantly shifting textures is oddly appealing and memorable. An entire score expanding on that approach, mixing melodic snippets with more rhythmic elements, might make for a great listen on its own. The rest of the score, however, is frequently atonal, almost always dissonant, and difficult to fully embrace. Kudos to the composer for branching out and crafting an interesting musical world. My brain was kindled but my heart remained cold and uninvolved. It is, indeed, the music of the Pod People.