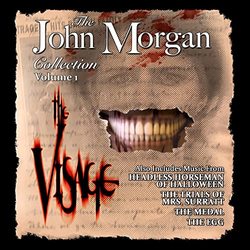 Dragon's Domain Records, to be distributed through BSX Records presents The John Morgan Collection, Volume 1, featuring world premiere releases of music from several projects the composer has been involved with across his career.

John Morgan is best known as a leading reconstructionist of vintage film scores, in partnership with composer/conductor William Stromberg. With Morgan's expertise in transcription and orchestration and Stromberg's capability as a conductor, the pair have been involved in restoring significant film scores for new recordings, allowing rare historic and artistic film music in many genres to be recorded and released, many in complete form, for the first time.

The John Morgan Collection, Volume 1 gathers together a number of Morgan's lesser-known, independent short film scores, and one score for an audio play broadcast on radio. The scores demonstrate Morgan's affinity to the form and style of classic film music and on their own contain some remarkable music which we are pleased to share.

Dragon's Domain Records is excited to present the world premiere compact disc release of these scores included on The John Morgan Collection, Volume 1, remastered and reconstructed from the composer's own elements by James Nelson at Digital Outland with assistance from composer William Stromberg. The booklet includes exclusive liner notes written by author Randall Larson, with the participation of composer John Morgan and comments from Kirk Henderson, director of The Visage.