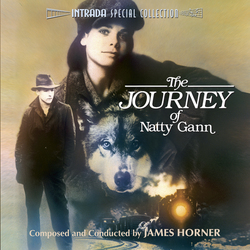 The Journey of Natty Gann

Horner, with long-time engineer Simon Rhodes, personally assembles CD just as he would have for major label in 1985, then allows 9 additional minutes of music to play as bonus after "Reunion-End Title." Rhodes masters CD at Abbey Road using Horner's own personal tape, the only surviving first-generation copy known to exist. Some minimal wear and tear is evident but crisp stereo sound prevails. James Horner conducts.