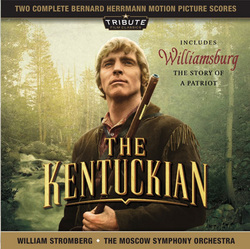 The Kentuckian / Williamsburg: The Story of a Patriot

There are few things as rewarding as listening to a great composer's music written at the peak of his power and coming from the depths of his own soul.

So it is with Tribute Film Classics' richly realized rerecordings of Bernard Herrmann's scores for The Kentuckian (1955) and Williamsburg: The Story of a Patriot (1957). Both are wonderfully expressive examples of Americana at its most heartfelt.

In his only directorial effort, Burt Lancaster also stars as The Kentuckian, a frontiersman with a yearning to leave Kentucky and find a new life with his young son. The film is a coming-of-age story for both father and son, who find themselves up against a quandary of obstacles keeping them from having the means to travel on a steamboat to Texas, the faraway land of opportunity that awaits them. "Herrmann's score provides both wistful and spirited insight into frontier life in 1820s America," says Tribute producer Anna Bonn. "The Kentuckian intertwines many of his compositional styles into an Americana-themed score with undeniable trademark Herrmann characteristics."

Tribute score reconstructionist John Morgan adds, "Since this 2008 rerecording would include all the music Herrmann wrote for the film and would contain forty-eight separately titled cues, we put many of the short cues together without pause to maintain a solid, rewarding listening experience. Due to Herrmann's inherent musicianship, these cues fit together beautifully..."

Williamsburg: The Story of a Patriot is one of Bernard Herrmann's undiscovered treasures for many film-music enthusiasts. The film was created to run exclusively in the specially designed twin Patriot Theaters in Colonial Williamsburg. It first premiered in March of 1957 and is currently the longest-running motion picture ever: fifty-one years and counting. Herrmann scored Williamsburg with a small orchestra, composing melodies that gave individual instruments each their own moments to shine.

Steven C. Smith, author of the acclaimed A Heart at Fire's Center: The Life and Music of Bernard Herrmann, says, "In Williamsburg—a project Herrmann so loved, he declined payment—his recreation of the Georgian idiom is not glib pastiche, but music worthy of its ancestors. In its grace and unforced elegance, it offers a window into a side of Herrmann's nature often forgotten amid tales of his tempestuousness. Finally, it demonstrates another remarkable aspect of his gift: Herrmann's ability to 'get inside the drama' and enrich the cinematic experience—while writing personal, uncompromising music from the depths of its author's soul."

As with previous Tribute releases, the music is performed to perfection by the Moscow Symphony Orchestra under the baton of William T. Stromberg, who says, "Herrmann had a gift for writing wonderfully nostalgic and expressive Americana music, and for me these scores were a real pleasure to conduct. The Kentuckian and Williamsburg: The Story of a Patriot are great examples of his gift. The orchestra recognizes this as well and always plays his music with feeling and energetic enthusiasm... I am very lucky and so honored to be able to perform his music—music I grew up inspired and moved by more than any other. For me personally, our new recording is yet another tribute to the master of American cinema."

Included with the CD is a 32-page deluxe booklet beautifully designed by Jim Titus, with a Herrmann overview by Steven C. Smith and exhaustive cue-by-cue analysis of both scores by Kevin Scott.