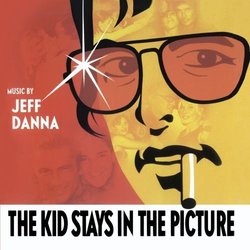 The Kid Stays in the Picture

Review: Kid Stays In The Picture, The

The Kid Stays in the Picture, a documentary about Hollywood mogul Robert Evans, is a well-told yarn about one of Hollywood's most colorful and still artistically respectable characters.  In some ways more effective than the film itself, Jeff Dana's score, combined with a variety of source music, paints a strikingly vivid portrait of the time and place.

For a motion picture, The Kid Stays in the Picture uses surprisingly little motion picture footage.  Instead, it draws mainly on source photos and the vivid narration by Robert Evans, based on his popular autobiography.  We know that he is telling a tale and much has been embellished, but it is so much fun that we don't mind.  The film itself is more of a vehicle for this great story than a superlative work in and of itself.  Honestly, with the dearth of moving images, it feels a little flat, but again, given the compelling subject (the man who made The Godfather and Love Story and Chinatown and many others) it works well enough.

The soundtrack consists of a score by Jeff Danna combined with source music for a variety of sources, such as Cat Stevens, Elton John, and Chico O'Farrill.  When one is watching the film, the music is generally not that noticeable because it is so well-placed and appropriate.  Much of the score feels like it could be from an old Hollywood flick itself.  When listened to separately, it is quite an impressive work.  It perfectly evokes both the time period, mostly '60's and '70's, as well as the cheesy Hollywood feel so important to the film.  On a side note, there is a bonus track, the Love Theme from The Godfather, which adds a nice punch line to the soundtrack.

The one downside, and this is a weak negative, is that the music is very specific to the subject.  If one has no love for either old Hollywood or Bob Evans, this may not be all that compelling.  But if you are already one who buys soundtracks, you will probably find this of interest.  In conclusion, this is a solid soundtrack that is a true pleasure to listen to.  Having said that, it is geared toward fans of the film and those with a love of old soundtracks themselves.