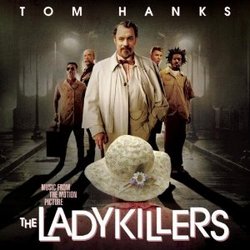 The Coen Brothers continue to walk that razor edge of mainstream filmmaking and independent sensibility. Again they return to their comic-noir roots and revisit the Earling Studio's 1955 classic black comedy that starred Alec Guiness, James Mason and some upcoming comedian named Peter Sellers as thieves who commit the perfect crime. However the only thing that stands in their way is a seemingly helpless widow. Thus, they must "do her in."

Here the Coen Brothers transplant the caper to the Louisiana bayou replete with southern gentlemen and riverboats. What this locale change really alters is the "lady" of the title. Instead of a timid British woman, she becomes a brass churchgoer played with gusto by Irma P. Hall. She's a no-nonsense woman who doesn't stand for any misbehaving, especially by anybody who listens to rap or the "hippity hop" as she calls it.

Thankfully this album holds it's own. Ladykillers has less of the bluegrass/folk mixture of Oh Brother and Cold Mountain and focuses more on the broad spectrum of Gospel music.

The clever tactic of the album is to cover the same gospel tunes in several different eras. One track will have some of classic gospel's best such as Soul Spinners, Bill Landford & The Landfordaires and Blind Willie Johnson (with some fantastic bottleneck slide guitar work in "Let Your Light..."). The other versions are covered by a rising gospel group or rapper. "Come, Let Us Go Back to God" and Let Your Light Shine on Me" are used twice while "Trouble of This World" is three times. This may sound disjointed, but Burnett chooses tracks that have a strong thematic connection to the original gospel, either in lyrics or the rousing samples from the original songs laid in ("A Christian's Plea" is revisited as a sample in "Sinner"). Southern flavored rap group The Nappy Roots contributes three sharp ironic tracks (the best of which being "Another Day, Another Dollar"). On the other end of interpretation, Donnie McClurkin sticks to the original approach of "Come, Let Us Go Back to God" with a slow mellow revival groove.

This creates a delicate balance is created between these styles, providing the listener a through line stretching across over 50 years of urban music, revealing the unlikely roots of one genre in an older one. And in result provides a toe-tapping treat for fans of Gospel and eclectic music.