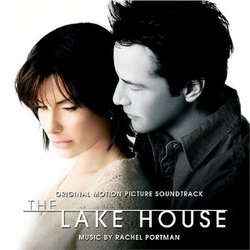 In an intriguing setting for a romantic melodrama, The Lake House places stars Keanu Reeves and Sandra Bulloch in the same Chicago area residence but at different time periods, two years apart to be specific. They communicate and eventually fall in love by writing letters to one another, transported through the house's apparently magical mailbox. This time skipping device may have left some viewers bemused, but the overall effort impressed many critics due to its genuine heart and performances. Composer Rachel Portman was hired to provide her usual class and taste to the film and the album from Lakeshore Records mixes select score cues, conducted by David Snell, with a handful of pop songs.

The initial five tracks are occupied with winning, pleasant, low key offerings from pop icons Paul McCartney ("This Never Happened Before") and Carole King ("It's Too Late") in addition to current indie favorites Nick Drake ("Time Has Told Me"), The Clientele ("(I Can't Seem To) Make You Mine") and Eels ("Ant Farm"). The remainder of the album is devoted to Portman's music, beginning appropriately with "The Lake House," a lyrical strings and piano cue, twice returning to a hopeful, rising theme. This theme is then presented on acoustic guitar at the start of "Pawprints." "Tough Week" and "Mailbox" continue the light yet melodic piano and strings combination, along with added harp and woodwind lines.

The first lengthy track on the disc is the five minute "Sunsets," which opens with whimsical string accents, growing into a bright, syncopated piece before the mood shifts to feature a warm, romantic acoustic guitar. The rising main theme returns in the closing moments. "Alex's Father" is the hub of the score section, at almost seven minutes, a contemplative, sometimes melancholic yet moving set piece for piano, flute, clarinet and strings, with the hopeful main theme blossoming again towards its finish. "Il Mare" features a saddened cello and piano duo while the acoustic guitar brings a pleasant tone to "Tell Me More."

The final three tracks form what could be called the "Waiting Suite," as the score moves from "Wait for Me" to "You Waited" and closes with the response, "I Waited." The first of these opens with a more urgent, worried state, then darkens through a low pedal drone beneath a lonely English horn and tense, rising string textures. "You Waited" is hesitant, yet tinged with optimism as the main theme appears on flute, then accompanied by upper strings. An understated feel is maintained in "I Waited," as it progresses from gossamer piano and string textures to one brief, last, rapturous dose of lyricism. The album's song and score work well in conjunction with each other, keeping a consistent tone from start to finish, while the score itself features an understated but lovely and engaging effort from Rachel Portman.