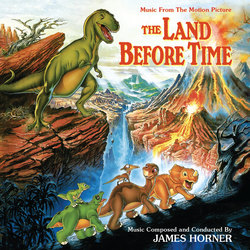 The Land Before Time - Expanded

Intrada's latest release from the pen of James Horner is his epic score for The Land Before Time, the first in a series of beloved films. Horner was busy in 1988, scoring five films – Willow, Red Heat, Vibes, Cocoon: The Return, and The Land Before Time. All five are a testament to his talent and diversity (and his ability to work under pressure, having only 5 weeks to score Land). This project continued the relationship between Horner and animator Don Bluth, whose joint inaugural work was from two years earlier on An American Tail. For The Land Before Time, Horner essentially composed a long tone poem, filling nearly all of the film's 69 minutes with the lush, adventurous, and glorious music for which Horner is known, played brilliantly by the London Symphony Orchestra. As Frank DeWald says in the liner notes, "He binds several recurring themes together in kaleidoscopic fashion, demonstrating his gift for creating fluid ideas that reappear transformed in ways both obvious and subtle. Intervals, rhythms, harmonies or instrumental colors often change, maintaining a constant state of development and adding a sense of forward motion to the film itself." Horner composed in lengthy sequences, with cues running seven, nine, even 12 minutes in length.

Since Horner composed in such lengthy statements, the original MCA program featured a mere seven cues, just shy of the nine total cues in the film. Rather than record these lengthy pieces in separate parts and assemble later, Horner recorded them in their entirety to allow the musicians to generate considerable musicianship and nuance within the cues – time to get into the music. As such, the expansion only required Intrada to add two additional tracks, albeit tracks that run over seven and eight minutes long each. For this release, courtesy of Universal Pictures, Amblin Entertainment, and Universal Music Group, Intrada had access to Shawn Murphy's digital 3-track stereo mixes preserved on the 32-track session masters.

The story follows five intrepid young prehistoric creatures— four dinosaurs of various species and a pterosaur—as they journey west across a barren landscape to the Great Valley, where they hope to find abundant food at last. Along the way, they must deal with earthquakes, carnivores (especially the terrifying Tyrannosaurus rex), separation from their families and near-starvation.