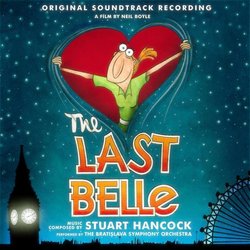 Performed by
The Bratislava Symphony Orchestra

MovieScore Media finds love (and great film scores) in the most unusual places—this time we release a short digital EP by award-winning composer Stuart Hancock who once again proves that small films do not necessarily have small scores—in fact, a symphonic orchestral score can do wonders to fill the 2-D animated characters with life!

Performed by the Bratislava Symphony Orchestra, The Last Belle is a rich, colourful and versatile score which gives you an emotional rollercoaster in just 14 minutes. The music follows the two parallel storylines, alternating between a hopeless romantic ("I've Got Myself a Date!," "Giddy Rosie," "Finding Love in London") and a carnivalesque rush which sounds like the most insane moments of Danny Elfman's career ("Going Down the Tubes," "Rushing to Ripov's" ). The score recently won the Gold Medal at the prestigious Park City Film Music Festival, Utah.