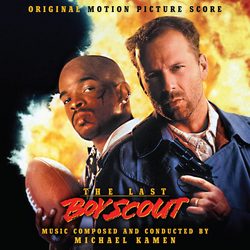 Composer Kamen reunites with producer Joel Silver to deliver another expertly-pitched score that bolsters and unifies the varied components of this unique Shane Black-penned gumshoe action/thriller/mystery, which has now achieved bonafide cult status. Noir-ish suspense, black comedy, violent action—Kamen's score handles it all with aplomb, even as it cuts against the action/blockbuster grain with its soulful and understated motifs.