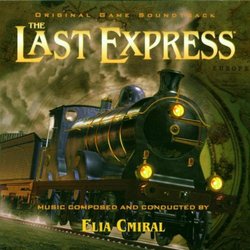 The turn-of-the-century adventure computer game, "The Last Express" takes you on a mystery involving international espionage, suspense and of course, murder. The game came out a few years ago, and is probably somewhat dated by today's standards (given how quickly the computer world grows nowadays). However, the full score for the game, composed by Elia Cmiral, is not out of date, and its cohesive mixture of synthesizers, strings, and percussion lend an almost otherworldly, yet distinct, sound to the game.

As the game takes place just before the outbreak of World War I on a European train, Cmiral chose to score the game with a heavy emphasis on solo violin and piano. The opening cue on the album, "Departure" is somewhat reminiscent of his main theme from Ronin, except that this was written beforehand, and involves a violin, not at duduk. Once the train gets going, the pace (and suspense) begins to increase, and by the end of the cue we have heard the main theme in all of its splendor. This is truly a cue that deserves to be re-recorded with a full orchestra (if the opportunity arrives).

After that, the cues come pretty fast on the album - I hadn't realized it, but in no time at all I was already listening to cue 14! As this is a game soundtrack, many of the cues are short and fit very specific situations that the player might find himself encountering. As such, just when you would hope the cue would take its time and build to an appropriate climax, it's over. However, it's "quality, not quantity" as they say, and the variety of cues that Cmiral provides us with more than makes up for the fact that the average cue on this album is just a hair over 1-minute long. But with 39-minutes of music on the album, it's still pretty loaded with variety.

This album features plenty of traditionally written suspense and action cues that work well to place the listener in pre-World War I Europe. Some moments seem slightly out-of-place, where the synth elements overpower the "orchestral", and the score takes on an all-too-modern bend. Additionally, the album is somewhat marred by the use of synthesizers as most of the cues would sound phenomenal if it had the budget for an orchestra. Merely a performance issue, I assure you, but nonetheless presentation needs to be taken into consideration. Ultimately, had the budget been available for a full orchestral recording of this score, I think that it would have taken on a much fuller and richer sound. However, short of that this score was a great start for Cmiral's American career, and with his continued success I'm hoping that he find the resources for an orchestral suite from this project.