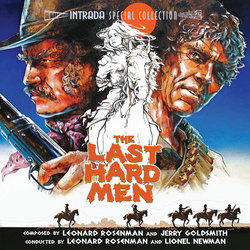 When collectors of movie music hear the names Leonard Rosenman and Jerry Goldsmith uttered together, two well-known feature film series might come to mind: Planet of the Apes and Star Trek. In each case, Goldsmith scored the original while Rosenman joined the series for a sequel. In between these two franchise associations came a relative obscurity that also connects the two, the 1976 western The Last Hard Men, for which Rosenman's original score was replaced with music by Goldsmith.

Rosenman was simply asked to provide an avant-garde score and was left without further input from the film's creators. The score is, as observed by conductor and Rosenman preservationist Deniz Cordell, "uncompromising in its depiction of the psychological shadings of the story it accompanies.

Leonard's music brings to life an arid, harsh, jagged and unsympathetic West, devoid of sentimentality or nostalgic yearning for the past that characterizes other westerns. It's also a score that's emblematic of the direction his film music was continuing to evolve in, emphasizing rhythmic stabs to create jeopardy, alternating harmonic patterns to heighten tension and using smaller melodic kernels as anchors for the overall musico-narrative arc."

The rejection started with just one scene. Rosenman insisted on leaving a rape scene unscored, but the film makers felt the scene fell flat so they pulled a cue for Goldsmith's Morituri to cover it. After hearing the result, the producers felt the music could be further improved upon, resulting in the Rosenman score being removed and replaced with Goldsmith cues from Stagecoach, 100 Rifles, and Rio Conchos. These cues were then rerecorded under the baton of Lionel Newman, and all but one were left unused in favor of the original soundtrack recordings.

This premiere release features the complete score Rosenman sourced from a three-track split mono element and mixed reasonably for stereo for this release and all the rerecorded Goldsmith material.