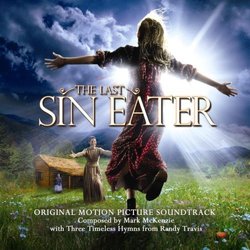 I\'ll be honest. We review person guys pretend we know everything but we really… really… don\'t. I\'d always seen Mark McKenzie\'s name, but I never really knew who he was. The same thing with this movie which quietly came out earlier this year. There\'s some Randy Travis covers of traditional gospel tunes ("Shall We Gather at the River", "Room at the Cross for You"). They\'re fine in that Randy Travis way, but that\'s not really important here. Like everyone else on this site who have discovered Mark McKenzie\'s work, I\'m impressed. Very quietly impressed.

This is the type of Lifetime Channel score that George Delerue was an expert at. McKenzie has done plenty of those in the past. While this type of music may feel precious in another composer\'s hand, McKenzie approaches the material seriously. His experience as an expert orchestrator, he knows how to capture a grand symphonic scale ("Mountain Meeting") but then contrast it with a lone instrument ("Dead Man\'s Mountain & Cadi\'s Pain"). He likewise pulls great performances out of the horn section ("It Doesn\'t Hurt Anymore!"). He spices the album up with a pan flute ("The Last Sin Eater Main Titles") that represents the Irish roots of the main characters.

Mark\'s McKenzie\'s growing fan base will be interested in this album. This isn\'t a "great" score.  This isn\'t even the best of his work, but McKenzie isn\'t being ask to bring that to the table here. It\'s a run-of-the-mill Christian drama and as impressive as the music is, it doesn\'t transcend the material. Hopefully, someone will give him that shot at something big. When that happens, I think we\'ll all be turning our heads.