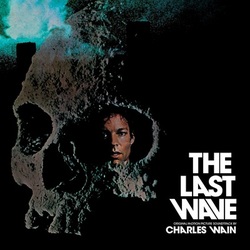 The Last Wave (also known as Black Rain in the US) was the final chapter in a trilogy of films scripted and directed by the leading auteur of the Australian New Wave, Peter Weir. Beginning in 1974 with the absurdist black comedy-horror The Cars That Ate Paris, and followed a year later by the lush gothic mystery Picnic At Hanging Rock, The Last Wave was a landmark in existential horror. Sitting alongside other Australian eco-terror films (e.g. Long Weekend) the film featured a haunting electronic soundtrack that is as mysterious and beguiling as the spiritual themes of the film itself. With no LP issued after the film's premiere in 1977, and together with the mystery surrounding the true identity of its enigmatic composer 'Charles Wain', the score is a largely unheard recording of pioneering experimental film electronics, easily compared to the music that contemporaries Klaus Schulze and Tangerine Dream were composing for Australian films during the same period or the electronic soundtracks of John Carpenter. Tense atonal electronics, synthesizer drones and manipulated Didjeridu all perfectly capture the film's ominous atmosphere, punctuating the slow hypnotic pace of this brooding supernatural thriller.