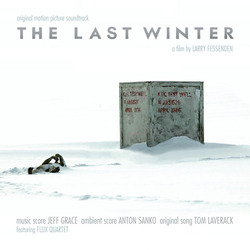 There is an even better album hidden within MovieScore Media\'s release of The Last Winter, one that eschews the long, barely audible snowscapes of Anton Sanko\'s sound design. Listening to The Last Winter from beginning to end, I fell asleep. Sanko\'s shimmering soundscapes, while necessary in the movie no doubt, lulled me into passivity, then torpor. I was not a fan of David Julyan\'s The Prestige either which, likewise, consisted of long stretches of ambient music and softly focused harmonic progressions. I know there are fans of drones and ambiences, as well as whole satellite radio channels dedicated to sound design and ambient music. Perhaps those who regularly tune in to Hearts of Space and Star\'s End will be able to appreciate Sanko\'s contributions to the soundtrack. I did find "Do You See It?" to be interesting towards its middle, when the parade of low bells and drones makes way to creepy, fluttery sounds akin to bats flying helter-skelter. Disconcerting, to say the least, but the snail-paced atmospherics have a way of diluting the impact of Jeff Grace\'s much more engaging score.

Jeff Grace caught my attention with MovieScore Media\'s earlier double release of his work on The Roost and Joshua, both of which exploited a string quartet for all of its worth. Fans of The Roost expecting more dissonant mayhem and crazy glissandi might be disappointed by The Last Winter: while The Roost was all about fright, The Last Winter is about suspense and paranoia. A cue like "What Am I Seeing?" echoes the harsh, lamenting glissandi of Grace\'s earlier work, building to what we would expect to be an all-out assault by percussion and strings. Instead, it fades away and is replaced by a steady wind effect, dissonant and pale, over which disturbing col legnos start to erupt like popcorn kernels. The biggest difference between the two scores and Grace\'s most significant contribution to The Last Winter is an epic and dramatic theme for string quartet that is introduced in "North" and to which the composer returns again and again to give the stark picture a touch of humanity. It is a beautiful melody and its return in "The Last Winter", painfully articulated by the cello, is even more touching than its introduction. It demonstrates Grace\'s ability to express beauty as well as utter chaos through the use of a string quartet and shows a certain kinship with Howard Shore\'s music.

The rest of Grace\'s score shares some similarities with James Newton Howard\'s style, especially in a cue like "Elliot" where a delicate theme for piano, more rhythmic than melodic, runs through, a subtle yet catchy release from the pervading tension. The following cue, "To Ft. Crow", possesses an early music vibe, setting things in motion to the sound of thick, scratchy strings, creating a sense of movement enshrouded in human nobility. Meanwhile, a piece like "Dawn" shows Grace\'s sound design, more acoustic than electronic, dripping with atonality, tense with discordant tremolo violins, violas, celli, and basses.

Sanko\'s ambient contributions are not bad, and Sanko will have his defenders. I find the idea of bringing two composers with different approaches into a single movie to be an interesting one and I am sure the movie benefits from this musical duality. On album, however, I found Sanko\'s music to be sleep-inducing, while Grace\'s score should have shone brighter. The Last Winter does confirm my opinion of the composer: he definitely has something good going on. Let\'s hope his next score shows him expanding his horizons: I would not want to see him typecast as "that guy that does the crazy things with the string quartet". There are worse lots in life, I\'m sure, but a talent used in repetition is wasted talent nonetheless.