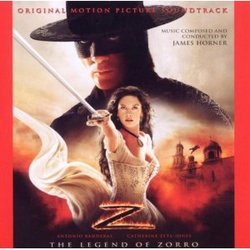 The Legend of Zorro

Review: Legend of Zorro, The

After he won two Academy Awards for his work on Titanic, composer James Horner scored one of 1998\'s more entertaining films: The Mask of Zorro. It was a delightful romp of an adventure film, and Horner\'s score stood out as being fun and not taking itself too seriously, while at the same time providing us with quite a few memorable themes.

Now, seven years later, the sequel to the film is here: The Legend of Zorro. Returning as Zorro is Antonio Banderas, with Elena (now his wife) played by Catherine Zeta-Jones. Years have gone by, and they now have a son, who aspires to be like his dad. Also returning is director Martin Campbell, and providing the rousing score is none other than James Horner.

In a nutshell, if you didn\'t like the original soundtrack to The Mask of Zorro, then you won\'t like the score to this one. The main reason being, it\'s basically more of the same. That isn\'t a bad thing, mind you. Zorro has a delightful set of themes, from the "Zorro Theme" to the "Love Theme", and all the variations and incarnations therein. Horner hasn\'t really created any new themes for the sequel, although he has a rather subdued "False Love Theme" (you\'ll understand when you see the film), which is first heard in "A Proposal with Pearls / Perilous Times".

Orchestrationally, it\'s just like the old score: hard guitar strum, pipes, hand claps, foot stomps, and of course, blaring trumpet. The action moments, heard in tracks like "Stolen Votes" and "Joaquin\'s Capture and Zorro\'s Rescue", use fast-paced strings and thematic motifs to keep the momentum going. There are some slower more intimate moments, usually punctuated with variations on the Love Theme, such as those heard in "This is who I am" and "Statehood Proclaimed".

That brings up really my only complaint about the score: to really enjoy the album, you have to like the Love Theme. This theme shows up more times than Zorro\'s Theme does, almost to the point of overkill. Granted, it\'s appropriate when seen in context, and it is used quite nicely during some action sequences, but it would have been nice to have a new theme for a new film. Even their son doesn\'t get his own theme, but rather gets a playful version of Zorro\'s Theme, heard in "Classroom Justice".

The big climax cue occurs in "The Train", an eleven-minute long monster of a cue. It\'s an exciting piece, with plenty of percussion and bombast to keep the adrenaline flowing. It ends in a very non-Hornerish sound that, if you didn\'t know any better, might have convinced you that you were hearing an unused John Williams cue from Revenge of the Sith. Nonetheless, it\'s a great showcase of what Horner can do with the orchestra, and he even manages to convey that he was having fun writing it as well.

The Legend of Zorro makes a lovely companion piece to the score for the first film. It\'s just as fun, energetic, and fresh, but suffers only slightly from a dash of repetitiveness. Who knows if there will be more Zorro films to come, but if they do, I can only hope that Horner will be there to score them.