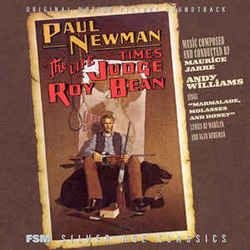 The Life and Times of Judge Roy Bean

Review: Life and Times of Judge Roy Bean, The

In only the second Maurice Jarre score released by Film Score Monthly, we are presented with the eclectic The Life and Times of Judge Roy Bean. Directed by the legendary John Huston and starring Paul Newman, the 1972 film recounts the tale of an outlaw in the old West who decides to make himself the upholder of the law in an isolated town. His law still involves pistols, but he continues to deal in justice and personal vengeance until no longer needed. It had previously been issued on LP, but this expansion includes many bonus cues, allowing the quirky and varied score to grow beyond its central song, "Marmalade, Molasses and Honey", composed by Maurice Jarre with lyrics by Marilyn and Alan Bergman.
The album opens appropriately with the "Judge Roy Bean Theme", in which a persistent dissonance underlines the pleasant, ever-optimistic melody, before the tonalities warm up to it completely. The theme is definitely Jarre, somewhat a more subdued cousin to Red Sun but without its ebullience. The tempo briefly perks up through woodblocks and other percussive instruments accompanying a Mexican-flavored trumpet line in "Sent To Magdeland / The Shooting", before the dissonance returns in flutes and cimbalom and heavily accented action breaks out. Solo horn and organ display a relaxed reverence in "Reverend LaSalle / Law West of the Pecos", afterwards is heard pensive variations on the Roy Bean theme. "Maria\'s Fashion Show" is a charming track, utilizing stringed instruments like the cimbalom plus a solo recorder.
A lengthy and varied track follows, "The Matchmaker/The Yellow Rose of Texas/A Strange Wagon", which is a bright and folksy in tone, includes warbling by Paul Newman, and concludes in a juxtaposition of dissonance against a percolating woodwind and horn duo. Famous vocalist Andy Williams makes an appearance in "A New Friend / Marmalade, Molasses and Honey", singing the Marilyn and Alan Bergman lyrics set to Jarre\'s melody in easygoing manner. "Hail To The Chief / The Swinging Outlaw / Bad Bob" features some agitated, odd percussion and brass exclamations while the joyful, Red Sun-esque nature returns in both "After Bob\'s Death / Late at Night" and "Bear Is Dead / Burial of the Bear". A reflective flute solo leads into a spirited reading of the Roy Bean theme in "Miss Lily Will Perform in San Antonio / On The Way To Opera", which moves through sonorous strings in a beguiling waltz tempo.
"Formerly Bean\'s-Now-Gass / Old Ragtime" runs the gamut from presenting the theme in a subdued bassoon and flute duet, then on horn against glistening harp and cimbalom textures and into a more comical setting. Noble horns open "Justice" which preface a winning bout of heroic action on brass and percussion, all based on the Roy Bean theme and then closing in a dissonant fade, mirroring the opening track. The aftermath is heard in "Miss Lily Langtry", where the Bean theme is developed in an initially hesitant manner on flute, piano and vibraphone, but gains more confidence by its close. The bonus tracks consist of an instrumental version of "Marmalade, Molasses and Honey", the logo music for the film, "The Yellow Rose of Texas" on music box and a 10-minute suite of additional score cues, focused primarily on variations of the Bean theme against mostly dissonant settings.
There are winning moments throughout the album to make this a must for Jarre fans, from the central song, the Roy Bean theme and doses of both action and beguiling, colorful instrumentation. Choosier Jarre fans might find it too eclectic and not expansive enough to match up to long time favorites such as Lawrence of Arabia and Mad Max: Beyond Thunderdome, but I for one was certainly surprised to find much to enjoy here.