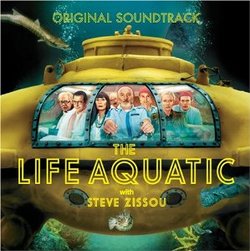 The Life Aquatic with Steve Zissou

The first several movies of an auteur catch you by surprise. Once people have seen a few of theirs films, their rhythms become familiar and fans often turn away from what they originally thought of as fresh and different. Wes Anderson's films live in a clearly fabricated world, where every detail is meticulously considered and constructed. This soundtrack is a collection of eclectic delights that don't really come together like Rushmore and Royal Tenenbaums. Like Tarantino, Anderson picks every piece of music carefully, choosing from the British Explosion of the 60's and 70's with 70's punk.

This film takes more from the 70's and early 80's than his previous works (including a little Devo). These tracks are great: There's some Zombies ("The Way I Feel Inside"), Iggy Pop ("Search And Destroy") as well as David Bowie ("Life On Mars?" and "Queen Bitch" which ends the movie). Bowie in particular gets a lot of airplay because one of the film's characters (played by Seu Jorge) performs acoustic covers of his music all through out the film. In Portuguese, no less. The conceit is cute on film, but it wears down quickly on the album, especially since they only use the original location recording, clapper sounds and all. The unintended result comes off lazy.

Composer Sven Libaek's airy jazz documentary music is also used to kitschy effect ("Shark Attack Theme", "Open Sea Theme"). Anderson's regular collaborator Mark Mothersbaugh contributes another quirky clever score. He shows off his Devo roots in wonderful tracks such as "We Call Them Pirates Out Here" and specifically "Ping Island" where he starts with a silly new wave beat that shifts the melody to a string ensemble and then a full orchestra. When are we ever going to get full releases of his work?

This all good, so why am I not liking this album more? Prominent tracks from the movie are missing (especially from the Tiger Shark finale) and Sue Jorge's covers take up too much space. It suggests a sloppily constructed album of great, wonderful music.