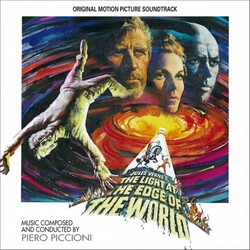 The Light at the Edge of the World

Quartet Records and GDM present the fully remastered reissue of a classic score by Piero Piccioni.

The music by Piccioni is one of the composer's own personal favorites and his care for the project shines through the music. The score has a rich thematic vein, featuring distinct themes for Denton, the island, the pirates and a former romance that haunts him to this day. Though Piccioni wrote a lot of music for the film, many cues were truncated when the picture lost about 20 minutes from its running length. Now you can hear the whole score in excellent quality, remastered by Claudio Fuiano from the first-generation master tapes.

The new edition by Quartet Records begins with the original album program from 1971 and is followed by an assortment of bonus tracks, including two organ cues performed by Piccioni himself. The full-color 12-page booklet includes liner notes by Gergely Hubai, who discusses the making of the film and the score, including the various cuts made to the story and the music.