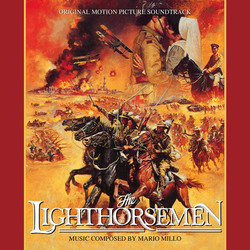 The large-scale orchestral score has gone on to be regarded as one of the great Australian film scores. It took Millo about 6-8 weeks to write, orchestrate, and record the music for the film. The score was recorded in Robert Blackwood Hall at Monash University in Melbourne. The recording was engineered by Roger Savage using Soundfirm's mobile recording truck, and performed with musicians were from the Melbourne Symphony Orchestra, then moonlighting as the Victoria Philharmonic. The sessions were conducted by noted Australian composer/conductor William Motzing.

Previously released on compact disc by 1M1 Records in 1991, Dragon's Domain Records is excited to bring The Lighthorsemen charging back into the marketplace, newly remastered by Digital Outland. The booklet includes exclusive liner notes written by author Randall Larson, with the participation of the composer and producer Antony I. Ginnane.

This release is a limited edition release of 1000 units.