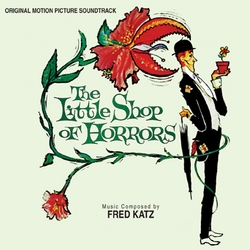 The Little Shop Of Horrors

The score to Little Shop was written by Fred Katz. Katz, born in 1919, was a child prodigy on both piano and cello, but would become a well-known cellist in the Los Angeles music scene of the 1950s—the first really to take the cello into the jazz arena. He became part of the very unique Chico Hamilton Quintet and was both heard and seen in the film Sweet Smell Of Success. At some point in the late 1950s, Corman found Katz or Katz found Corman and the two collaborated on several films, including A Bucket Of Blood, The Wasp Woman, Ski Troop Attack, The Little Shop of Horros, and Creature from The Haunted Sea.

Katz's score perfectly accompanies a film that is occasionally worthy of Ionesco in its surreal weirdness. In fact, Katz's music is as much fun as the film—it's funky, jazzy, beat, hipster music, with occasional horror touches, that will keep a smile on your face or conjure up wonderful memories of Seymour Krelboin, Gravis Mushnick, Audrey Fulquard, Burson Fouch, Wilbur Force, and, of course, the great Audrey Junior.

The CD is in mono, as recorded, and is in as close to film order as we could get it. This release is limited to 1000 copies only.