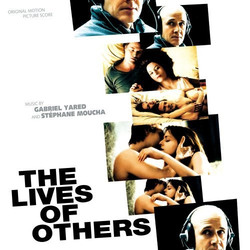 The Lives of Others

Review: Lives of Others, The

One of last year\'s best films also happens to feature one of last year\'s best scores. I was frustrated for some time after seeing The Lives of Others that no soundtrack release was available, so it was reassuring when Varese Sarabande saw fit to release the score in June this year. It\'s a skimpy release, containing less than half an hour of music, so it\'s not entirely satisfying as a stand-alone album, but the sensitivity of the compositions more than makes up for the brief running time.

The score marks only the second occasion on which Gabriel Yared\'s sometime orchestrator, Stéphane Moucha, has received equal credit, following their 2003 collaboration on the little-known Les Marins Perdus (The Lost Seamen). An experienced composer for television, Moucha (who is almost twenty years Yared\'s junior) has had fewer opportunities to display his talents on the big screen, but if his work continues at the high standard established here, we have a lot to look forward to from his future collaborations and solo works.

The score for The Lives of Others retains Yared\'s trademark style – the delicate instrumentation and luxurious melodies – but by no means is it the effort of a composer resting on his laurels. Ten years after his Oscar win for The English Patient, and twenty years after his unforgettable work on 37°2 le matin (Betty Blue), Yared proves himself here as one of the most consistent (and consistently good) film composers in the world.

Yared and Moucha\'s approach is simple and very effective; the majority of the score relies on three central themes. The first, which conveys the menace and uncertainty of life in Stasi-monitored Germany, is introduced in "The Invisible Front" and carried over into "The Betrayal" and the first half of "Stasi Informant \'Martha\'". Its driving bass ostinato suggests the rigidity of a military march, and is overlaid with creeping string chords to suggest an unwelcome presence.

The second and most memorable of the themes is introduced in "HGW XX/7" and reiterated in "The Lives of Others" and the second half of "Stasi Informant \'Martha\'". It\'s an anguished theme, conveying the desperation of the film\'s characters, but it manages to avoid dramatic overstatement. One of the greatest challenges facing Yared and Moucha was to keep what is essentially a love story between two men from becoming sentimental or romantic in a Hollywood way. This objective is met perfectly in the title theme, which never wallows for too long in conventional melodrama, instead favouring a restrained, almost classical approach.

"HGW XX/7" features iterations of this theme for full orchestra, with Yared\'s trademark wash of strings, and a quieter statement foregrounding a duet between piano and classical guitar. The instrumentation is echoed when the third theme is introduced in "Linienstrasse". This theme, which is more melancholy and less anguished than the title theme, reappears only once (in "Georg Dreyman, Dramatist") but lends weight and unity to the score. It does, however, seem an odd choice to close out this selection, especially considering the prominence of the title theme during the film\'s closing credits.

"Faces of Love" has no melodic relatives in the score, despite the fact that it accompanies arguably the film\'s most emotional scene. Yared and Moucha\'s choice to introduce a new theme so far into the film is an interesting one, but it works perfectly as a release valve for all the emotions and tensions that build up during the course of the film. Its unabashed sweetness is perfectly judged and never over-powering. Similarly, "Sonata for a Good Man" has no obvious thematic connection to the rest of the score, but it\'s a bittersweet classical interlude for solo piano that ends on a decidedly ominous note.

It\'s a shame this score didn\'t receive a release closer to the date of the film\'s release as it could have reached a wider audience. Thankfully, though, it\'s the kind of score that will garner devoted fans who are willing to hunt it out no matter how late it arrived on the scene. They will find themselves duly rewarded.