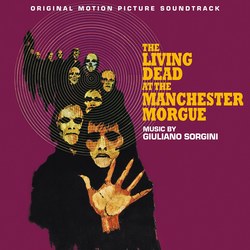 The Living Dead at the Manchester Morgue - Remastered

An early Euro-zombie movie set in England follows the investigation into an attack of the undead feasting on human flesh. As opposed to a virus or other biological phenomena, this story reveals that untested farming equipment is responsible for these inhuman abominations. Best known for its groundbreaking gory effects and realistic-looking carnage, the cult movie has a score that matches its notoriety.

In a technological innovation, composer Giuliano Sorgini was given the budget to record his score on four-track tape, a historical first for Italian horrors. The core idea for the score is giving sound to the titular dead – the screams, howls, laughs, cries and whispers. Recalling the works of Italian avant-garde composer Luciano Berio, the inclusion of human voices (including Grau's own voice in the mix) reminds audiences of the humanity of these now disfigured characters.

Remastered by Chris Malone from the original album stereo master tape, this release features new liner notes by Gergely Hubai discussing the film and the score with comments from director Jordi Grau.