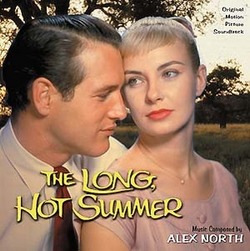 As good as it gets. The CD coupling of these two Alex North scores written for films based on the works of William Faulkner makes for, quite simply, one of Varčse Sarabande's finest and most exciting releases ever.

North's classic and heartbreakingly beautiful score for The Long, Hot Summer appears here more complete than ever before and in stereo for the very first time. The film starred Paul Newman, Joanne Woodward, Orson Welles and Lee Remick and featured a love theme and score among North's very best.

To further enhance this major release, we have added North's almost entirely unknown but equally brilliant score for the 1961 film Sanctuary. This Faulkner adaptation also starred Lee Remick, along with Yves Montand and makes for one of the greatest film music discoveries in recent memory.

Featuring over 77 minutes of music, this historic pairing becomes the longest single Varčse Sarabande CD of all time. Twenty pages of detailed liner notes and photos from the films cap off this special limited edition of 3000 copies. You do not want to miss this one!