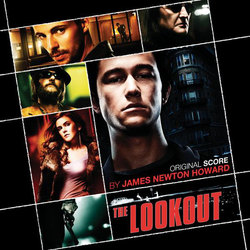 Though James Newton Howard\'s scores are rarely dominated by piano - like Rachel Portman (The Cider House Rules) or some John Williams (Angela\'s Ashes) - the piano elements and motifs are one of my favorite parts about Howard\'s work. These cues are usually simple and subtle, often as an undercurrent melody to strings - The Interpreter\'s "End Credits" - or to a woodwind as in "Eptesicus" from Batman Begins; they may be the foreground or just for sound color like "Goodbyes" and "Maddy & Archer" respectively, from Blood Diamond. In the score to The Lookout, Howard uses a beautiful piano melody that is simple - either a single note at a time or 2-3 note chords - but evocative. It appears on the album only twice, first in "Fantasy" with a light acoustic guitar behind it, then again, slower and solo, at the end in "To Be Forgiven."

As a whole, this score is rhythmic and often upbeat. The instrumentation is dominated by acoustic guitar and light percussion, with piano and sparing electronics mixed through. It does not utilize an orchestra like Howard\'s Dinosaur and Hidalgo, nor the powerful chorus of "Tarawa" from Snow Falling on Cedars. It opens with the track "I Wake Up" with just the acoustic guitar, which is later joined by simple percussion: it conveys the sense of motion but not in the action-score sense, and you almost find yourself tapping along with it. This instrumentation continues through the early tracks, the melody becoming more complex in "The Night Janitor" and taking on a sense of the western in "Casing the Bank." The pace slows with a different piano motif in "Money is Power" and begins to build tension through heavier percussion and chords in "Heist, Pt. 2." "Start at the End" is upbeat again, lighter but maintaining some of the tension, which ultimately seems to resolve with the slow piano motif in "To Be Forgiven."

Overall, this score is focused more on mood than theme, using instrumentation, rhythm patterns, and simple motifs for coherence. Released only as a digital download, it is short at 36 minutes, but good background music that may get you to pause and pay attention with a few of the motifs.