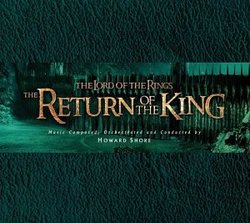 The Lord of the Rings: The Return of the King - Limited Edition

Review: Lord of the Rings: The Return of the King, The

If there is any justice in Hollywood (a debatable notion), by the time you read this Howard Shore will have picked up his second Oscar for the final installment of Peter Jackson's Lord of the Rings films. After The Two Towers got unfairly railroaded out of consideration until the very last moment, this should prove to be the Academy's one and only chance to wipe last year's egg of their collective faces. Whatever way the silly award thing goes, Shore's Return of the King unequivocally stands head and shoulders above the competition. (The only other nominee that could oust him, I'd guess, would be also-frequently-hosed Thomas Newman for Finding Nemo.)

It has been said before, both here and many other places, but Return of the King is a triumphant conclusion to what must be one of the greatest achievements in the history of film scoring. The CD from Warner Reprise has been in my player for quite some time now, and no score has gotten this much personal scrutiny from me since, well, Fellowship came out two years ago.

Over the course of the seventy-plus minutes he was allotted here, Shore finds time to both revisit his beloved themes from the previous films and flesh out his theme for the noble kingdom of Gondor. I'll try and hit a few of the many highlights that have popped out at me over the weeks I've been listening:

"Hope and Memory" gives the listener a yearning and wistful reprise of Gandalf's "riding" music from Two Towers, followed by a wonderfully understated reestablishment of the "Fellowship" theme.

"Minas Tirith" has a moment with soprano Ben Del Maestro that gives me chills every time I hear it, right before the CD's first thundering reading of the Gondor theme.

Time will only tell, but "The White Tree" a.k.a. the music for the lighting of the signal fires is probably one of my favorite pieces of film music ever. No exaggeration, especially in the context of the film, this steady build of pulsing strings eventually crashes into the Gondor theme again. Majestic, hopeful, a literal beacon in the continually withering world of modern film scoring. It also makes me as excited about movies in general as I did when I was ten.

Bill Boyd's vocal on "The Steward Of Gondor" is a wonderfully melancholic finish to Shore's plaintive use of the pan flute.

Though edited for time, the cue "Minas Morgul" also works like gangbusters in the film; a shrill and chilling culmination of all that Shore has put into Sauron's theme over the previous two films, building to an ominous and brooding horn figure over the old ringwraith ostinato. This thrilling cue is what happens when you have three films over which to build a better mousetrap.

The gorgeous "Twilight And Shadow" and "Anduril" take two elvish motifs from Rivendell to previously unimagined heights, and "Shelob's Lair" is a terrifying standalone set-piece that in any normal score would be the album's biggest highlight.

"The Black Gates Opens" finishes with Shore's other major new theme, a moving lullaby for the Grey Havens and all that they symbolize within the film.

Whew. Sorry about all that. I set out to give highlights and ended up nearly dealing out a track-by-track missive. I'll try and wrap this up quicker.

The last twenty-odd minutes of the disc, including the title cue, play out as a bittersweet cousin to "The Breaking of the Fellowship" from Fellowship. Many highlights throughout, many misty-eyed moments for someone who has seen and enjoyed the film as much as I did. So when "Into The West" with vocals by Annie Lennox comes around, Shore has more than satisfied with a powerful emotional payoff to his entire three-film score. (As a footnote, the deluxe CD set comes packaged with a DVD that contains an alternate end title demo by Lennox and Shore called "Use Well The Days". Nice little companion piece, and a wonderful sneak preview of the box set they have planned for all three scores.)

Gush gush gush. I can feel some readers getting impatient with my fanboy ways here. But you know what? It's really this good. I f there is one complaint I have about the release, it would be that a great many of my favorite moments in the film simply could not be included on a single disc. The choral reading of the "Fellowship" theme late in the film, the final charge of the Rohirrim to name a few. Boo hoo, bring on the box set please.

In the meantime, the only word I can come up with to describe my collective feelings about Shore's work on the three Rings films would be grateful. In this jaded, cynical day and age, I am just so very grateful to have this music around to remind me of what movies and film music are really capable of.