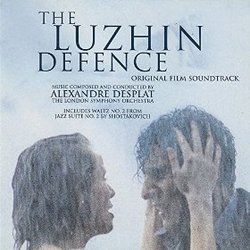 The Luzhin Defence is a story about love, genius, madness - and chess - set against the backdrop of post-World War I Europe. Starring John Tuturro and Emily Watson, the film was directed by Marleen Gorris based on a novella by Vladamir Nabokov. The mournful and sad atmosphere of the film called for an equally emotional score, adeptly provided by Alexandre Desplat.

Two main themes dominate the score. The first is heard in "The Luzhin Defence", a piano and string based motif, is calming and somewhat optimistic. The second heard in "Love Theme from The Luzhin Defence" is a completely string based lush theme, it reminds me of Ennio Morricone meshed with John Barry and a hint of John Williams. It's highly emotional and very well done.

Much of the score is comprised of variations on those two themes. Whether optimism ("The Arrival") or romance ("Alexander and Natalia"), it all seems to flow rather nicely. From a period-styled piano piece ("Dancing on the Lake") to a more frenetic sort of madness ("The Dark Side of Chess", "I Need A Defence"), Desplat gives us plenty of examples of his skill. "The Glass King" followed by "Checkmate" are a pair of cues that make a wonderful climax to the album. It's riveting and emotionally satisfying.

Also included on the album is Shostakovich's "Waltz No.2 from Jazz Suite No. 2", a wonderful and recognizable tune. But it's not enough to have it in the middle of the album, so it's also included at the end. But it's the exact same track, which begs the question, "Why?" Once would have been enough, but it's still good music. The performance of the score by the London Symphony Orchestra is excellent, and even if you don't get around to seeing the film, or don't know much about Desplat's work, I would strongly suggest giving this album a listen.