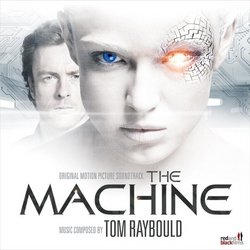 Coinciding with the film's American premiere on April 25, MovieScore Media releases the BAFTA Cymru-winning music, by composer Tom Raybould, for The Machine, an exciting action/thriller written and directed by Caradog W. James.

Featuring a clear and distinct voice focused on electronica, Tom Raybould's contributions to The Machine simply burst with retro energy as the composer paints a detailed picture of a terrifying society steeped in militaristic empowerment and literal war games to boost their cause. Ranging from the moody "Opening" to the heroically revolting "The Machine" which also contains some vocals to illustrate the humanistic awakening of the AI, the score offers a wide variety of snapshots from the future with a voice strongly linked with the past. Recalling the slick, nostalgic sound of Tangerine Dream or the Tron soundtracks, The Machine may offer the most faithful tribute to classic 80s sci-fi soundtracks coming out in recent years.