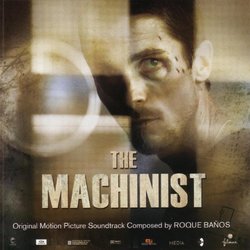 Think of the following words: Elfmanesque, sweeping, brass clusters, elegiac. Do they ring a bell? Well, they should, since pretty much every score review mentions at least one of these by-now overused clichés. I\'m afraid I might have thrown in a "sweeping" or two in the past, and don\'t start counting the number of times I\'ve used "Elfmanesque". But today, I have no choice but to shine a very bright beacon on that most overused clichés of all: Herrmannesque.

The spirit of Bernard Herrmann is alive and well in Roque Baños\' score to The Machinist. The movie centers on Trevor Reznik, a very pale and skeleton-thin Christian Bale, who works as, you guessed it, a machinist and who hasn\'t slept in a year. Reality and dream-like trances begin to collide as his own sanity might be in danger of slipping away. The Machinist was directed by Brad Anderson, who made the particularly suspenseful Session 9 as a return to what scary movies used to be like, and here, once again, his desire to harken back to a more old-school approach to horror and suspense works gives us a chilling Herrmannesque score by relative newcomer (at least here, in North America) Roque Baños. The original approach for the scoring was what I had been expecting, not having seen the movie: ambient sound design, synthesized weirdness. But it was a late-night showing of The Day the Earth Stood Still, with Bernard Herrmann\'s out-of-this-world theme on the theremin, which made Anderson shift gears and ask for a complete rescoring of the picture. Baños not only got the string work right, but he also snatched the talents of thereminist Lydia Kavina, the niece of the inventor of the theremin.

Herrmann\'s theme to The Day the Earth Stood Still is inverted and used as the main building block to Trevor\'s theme which pops up in virtually every cue: on the theremin in "Trevor\'s Lair", played by the strings in a perfect pastiche of Psycho in "Miller\'s Accident", as violin glissandi in "Nikkolash\'s Game". This ode to Herrmann is ever present, surrounded by the sonic dreamscape of lonely piano notes, rhythmic harp pluckings, and glockenspiel echoes. "Steve\'s Car" introduces a second theme, which sounds remarkably like the Buffy/Riley Love Theme from Buffy the Vampire Slayer, right down to the solo string rendition. Baños also shows a proficiency in writing for a full orchestra, mixing in woodwinds, strings, and brass with ease and adroitness. And there is that eerie theremin, that ghostly, magnetic wail, pervading the score with its dreaminess and playfulness.

The Machinist is Herrmannesque. There is no other way to describe it. It is meant to be Herrmannesque and delights in being Herrmannesque. Its use of strings, its low, rumbling bass clarinet, its theme, its harmonic progressions all scream, "Bernard Herrmann!". And it\'s well done. A lesser composer would have botched the approach, but Baños understands the Master and isn\'t merely content to pastiche; he infuses enough of a personality into his dreamy score that it stands on its own as an enjoyable, well-crafted foray into delusions, illusions, and confusions.

Those four words could have been the entire review.