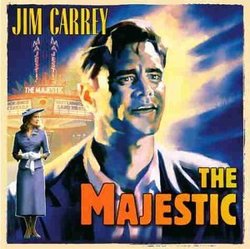 For his latest film, director Frank Darabont takes us back to the 1950s, during the age of McCarthyism and the Hollywood Blacklist.  In The Majestic, an up and coming screenwriter, Peter Appleton (Jim Carrey), discovers that he's just been blacklisted.  After awaking from a car accident during which he loses his memory, a small town claims him to be MIA World War II veteran Luke Trimble.  As "Luke" sets out to rebuild his life, (and "The Majestic", the movie house he and his father live above), his old girlfriend Adele (Laurie Holden) returns, rekindling the romance that once was there.  Unfortunately, Peter's memory starts coming back, and he's called to testify before the Senate's Committee on Un-American Activities - will that pit the town behind him? Or turn them against him?  The soundtrack to the film is heavy on the big-band aspects, with the emotional underscore provided by Mark Isham.

Heavily represented on the album is The Spencer Wyatt Big Band, actually comprised of some very talented studio musicians.  "Blue Note Boogie", "Begin The Beguine", "Blues In The Bucket" and "Stranger On The Shore" are all well performed, and fun to listen to.  Pianist Jim Cox also provides some solo performances, including "Boogie Woogie Stomp", "Dizzy" and "Aunt Hagar's Blues".  While this Darabont film doesn't feature a jail, it does feature a few period songs.  Nat King Cole's "Orange Colored Sky" and "I Remember You" are mixed up with "Paper Doll" by The Mills Brothers and Chet Baker's amazing rendition of "Over The Rainbow".

Capping off the album is about 20-minutes of Isham's score, spread out over three hearty tracks.  In "The Bridge", Isham underscores the tension and darkness of the accident that causes Peter to lose his memory.  Soft strings and piano highlight the end of the track with a rather Thomas Newman-ish feeling.  The romance between Peter and Adele is underscored tenderly in "Luke And Adele".  Much of the same style from these two tracks is carried over into "The Majestic - And The Magic".

Honestly, I found Isham's contribution to this album to be secondary.  While the thematic material never really seems to gel into a truly memorable theme, it worked well in the film, even if you left feeling no better or worse than when you came in.  Sure, it's always nice to have score from any film, but in this case I found myself drawn back to the Spencer Wyatt Big Band cues, and the Jim Cox material.