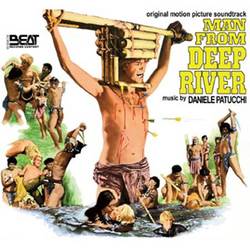 The Man from the Deep River

This release marks the debut of an unreleased ''couple'' in our catalog: director Umberto Lenzi and composer Daniele Patucchi (aficionados of our productions). The latter was given the task of composing the score for The Man from the Deep River, an adventure movie shot by the great living Tuscan Icon in 1972.

The movie starred Ivan Rassimov in the guise of an adventurer in faraway lands. The music? In the director's words, ''The score was given to a young composer, Daniele Patucchi. With enthusiasm, professionalism and a significant degree of knowledge of Oriental sounds, Patucchi composed an intense score, realizing both romantic melodies and colorful rhythms. The result is an effective score that even nowadays, decades later, holds fascination and musical elegance.'' What else can be said?

The CD is presented in a jewel case, with liner notes by Umberto Lenzi and Fabio Babini, mastering by Claudio Fuiano and graphic layout by Alessio Iannuzzi.

Note: The CD could have the Italian title of the movie.