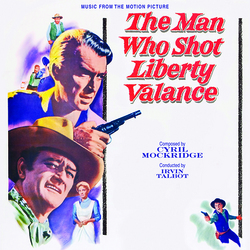 Cyril Mockridge provided the score to The Man Who Shot Liberty Valance and a great score it is, filled with original themes as well as some source music that's beautifully arranged into the fabric of the score. Ford asked for a nod to Alfred Newman's "Ann Rutledge Theme" from Young Mr. Lincoln, because he felt it evoked lost love. It's a short score, but one cannot imagine the film without it.

For Donovan's Reef, Mockridge mostly uses traditional Hawaiian music for his themes, but it all works perfectly in the film, giving it an authentic Hawaiian flavor and keeping the frolicsome nature of the film moving right along. There are also some very lovely themes as the score goes along, and it's just a delightful pastiche for a delightful pastiche of a film.