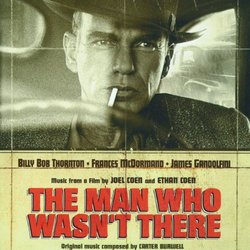 The Man Who Wasn't There

Review: Man Who Wasn't There, The

Ever since Blood Simple, filmmakers Joel and Ethan Coen have always relied on the musical talents of Carter Burwell.  Whether it's yodeling in Raising Arizona or cold Scandanavian strings in Fargo, he's always added his own unique flavor to their rather off-beat and unconventional films.  Now the Coens take on film noir in the black and white film The Man Who Wasn't There.  Ed (Billy Bob Thorton) is a barber who is convinced his wife (Frances McDormand) is having an affair with Big Dave (James Gandolfini).  As expected, things escalate out of control - a murder occurs, and things generally go downhill from there - but with plenty of twists.  The film is shot so well that Roger Deakins deserves yet another Academy Award nomination, if not a win.  The film is well paced and well acted, and the use of music is rather interesting.  Containing a lot of classical music (both as source cues and as underscore), it was about an hour into the film before any of Burwell's score showed up.  But when it did, it was like slipping on a comfortable shoe.

Beethoven's "Patetique" Piano Sonata No. 8 figures heavily into the film, and it's no surprise that it shows up twice on the album - first in a short version as heard as source in the film, and then again in longer form.  Sprinkle a bit of Mozart and some more Beethoven piano sonatas throughout the album, and you have a good chunk of the soundtrack.  It's all relaxing and sets the mood rather nicely.  The film takes place in 1949, and one big band swinging dance number, "Nirdlinger's Swing" was written by Burwell, but you might not realize it.

For the most part, Burwell's score is dark and solem.  Thick on the strings, and occasionally piano heavy, the main theme ascends in over major and minor chords, in typical Burwell fashion with a nice bass line.  He's not reinventing the wheel here - this is a score that is instantly recognizable as a "Carter Burwell" work, and if you enjoyed his efforts on Fargo and Miller's Crossing, then you're sure to enjoy this one as well.  "The Fight" isn't really thematic - it does provide a bit of underlying tension during the murder scene.

I feel that the best Burwell cue on the album is "The Trial of Ed Crane", which summarizes the main theme into a cue running just under four minutes in length.  It has a sad sort of romanticism about it that is tinged with the slightest bit of hopefulness.  It's tough to describe cues like this - they just speak to your inner emotions.  The piano and strings just do great things.  Running about 45 minutes long, this is a must have for any Burwell / Coen Brothers fan.