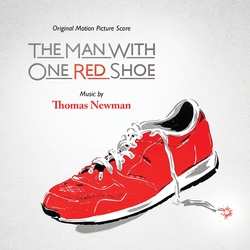 The Man with One Red Shoe

La-La Land Records, 20th Century Fox and Fox Music proudly present the world premiere release of renowned composer Thomas Newman's original motion picture score to the 1985 feature film mystery comedy The Man with One Red Shoe, starring Tom Hanks, Lori Singer and Charlies Durning, and directed by Stan Dragoti. Mr. Newman's bright and energetic score makes its premiere debut with this release. Fun and teaming with mischief and mystery, The Man with One Red Shoe is an early and notable entry in a canon of remarkable work that continues to this very day. The album was personally assembled by Thomas Newman and includes the film's "love theme" by Michael Masser, which was recorded prior to the start of Newman's work on the project. Produced for 20th Century Fox by Nick Redman, produced for La-La Land Records by the composer, Mike Matessino and Neil S. Bulk, and mastered by Dave Collins, this special limited release of 1500 units includes exclusive, in depth liner notes by writer Jeff Bond, (including a message from the composer to acclaimed percussionist Michael Fisher), and snappy art direction by Jim Titus.