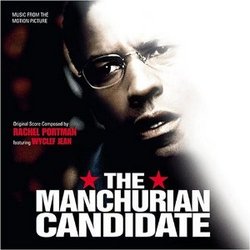 This was a case of a remake no one initially asked for or thought necessary, yet the 2004 version of The Manchurian Candidate, directed by Jonathan Demme, proved a surprise to both critics and audiences who found it quite competent and laudable. There were enough deviations in the story to keep it fresh for those who had seen the original 1962 film and it successfully engaged other viewers as a new thriller about corporate corruption and brainwashed soldiers. Rachel Portman was called in to provide the dark and turgid score, following on David Amram's contribution to the 1962 original, which steered clear of many of the Hollywood scoring trends at the time. Varese Sarabande has graciously provided listeners with music from both versions on one album.

Amram's compositions appropriately begin the album, his main theme being in a jazz idiom, a measured, melancholy piece for sax, trumpet, muted trombones, piano, bass and drums. This track overall works more as a source cue than music which would encapsulate the heavy politics and drama of the film, although the last minute includes a nice slice of Americana with woodwinds and brass quartet sounding out a proud yet mournful tune. This specific theme is reprised in different sections of the orchestra during the full score. "Queen of Diamonds" is in a modernistic, mid-20th century idiom, not unlike the challenging music of Alex North and Leonard Rosenman, highlighted by a twisted harpsichord solo, painting a portrait of Angela Lansbury's controlling, intimidating and manipulative mother character. "John Birch Lurch" is fevered, toe-tapping march, yet in its giddy excitement it sounds as if the performers are barely staying together as a group. The upbeat tone continues into "Slightly Manchurian Blues", a swinging number for jazz combo, brass and sax, a winning track.

A small string ensemble begins "Summer Affair / Wiggin' Out In Central Park", which first underscores the delayed romance between two characters of the film by using the main theme again, but this then moves back into the modernistic writing for jagged, halting contributions from snares, bells, pizzicato strings, brass and woodwinds. Dark woodwinds and strings also highlight "A Night in the Garden" with troubled, lonely variations on the main theme. This theme is reprised again in the next track, but in a much warmer and pleasant setting for brass and strings and finally the David Amram section closes with a great seven minute jazz jam, "Mesopotamian Candidate".

We are brought forward to the 2004 version abruptly with a track called "Fortunate Son" by Wyclef Jean, an surprisingly instrumental rock piece. This bleeds into Portman's score in the track "Black Helicopters, Secret Laboratories, Mind Drugs...", which retains the dark mood of Amram's original harsh, modernistic compositions but with an added pedal drone and fuller strings. "Sergeant Raymond Shaw" adds snares to the forefront of the orchestra, in a brief, moody cue. The longest cue, "Deep Implant Behavior Modification" is mostly about unsettling, rumbling textures with high strings swaying overtop, which then grows in intensity as a ominous brass chords and an electric guitar are added to the mix. Later, a wordless, dark male choir joins as well, adding to the unease.

"What If This Is All A Dream" starts with a hesitant, worried piano against strings before low percussion rumbles in again and the tone becomes more threatening, again rising in tension to the end. The piano returns in a simple guise in "I Am The Enemy, Major Marco", more assured yet still sounding troubled and the uneasy strings and choir work their into the cue before a pumping cello ostinato bursts forth and the mood turns more earnest and positive, a welcome change. The piano theme from "What If This Is All A Dream" is reprised in "The Assassin Always Dies" but also is more confident this time around before dissonant textures creep in once more. Portman's score wraps in "There Are Always Casualties In War", which reprises the piano motif from "I Am The Enemy, Major Marco" with sturdy support from the strings but this all drops away as an electric guitar is plucked in a distant manner and this track then moves into a vocal version of Wyclef Jean's "Fortunate Son".

I would say that both scores are effective in their respective films, but there is a higher listenability factor in Amram's music, mainly due to his modern, serial sections, mixed with lively jazz and blues tracks.