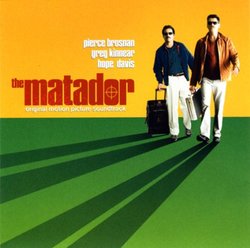 In The Matador, Pierce Brosnan continues to move beyond his Bond persona, this time playing an aging hitman who seems to be losing his edge while also developing a friendship with an average America salesman, played by Greg Kinnear. The film has been well received in most critical circles, due to its wit and chemistry between the leads, but it also boasts an enjoyable score by Rolfe Kent. In recent years, Kent has become a more prominent component in the arena of quirky, smaller films where his creativity can shine and unusual music is often called for. Other composers who often work in the same niche are Carter Burwell and Michael Danna.

The Matador primarily takes place in Mexico, where the two main characters first meet and thus Kent responds with a flavorful score. Unfortunately, only three selections of his work are included on the album, which is instead dominated by songs. It is an eclectic mix of songs to be sure, from well-worn classics such as Tom Jones\' "It\'s Not Unusual" and "In The Heat Of The Moment" by Asia to gritty rock from The Cramps\' "Garbageman" and an idiosyncratic dance track by Titan called "1, 2, 3, 4". There are also some breezy, pleasant instrumental Spanish guitar tracks, "Bahia Blanca" and "A Mi Guitarra", which are good pieces for a dinner party and provide the appropriate backdrop for the film\'s setting. An all-out mariachi jam, complete with accordion, appears in "No Te Rajes" and simply can\'t help but be infectious in its rhythms.

And speaking of infectious rhythms, the inaugural track of Kent\'s score on the album arrives as "Manila Fiasco". It sets down an up-tempo groove and lies atop a syncopated melodic line passed from trumpets to piano and marimba. Bongos join in the fun as well, as the tone changes to one more mysterious, with rising chords playing out to the finish. "The Matador Theme" shows up later, beginning with a more relaxed beat and a sly melody laid out on dulcimer and backed by harps, castanets and sliding strings. The pace soon increases and the strings dominate more in a long-lined melodic fashion, but then the tone relaxes once more as the catchy theme moves through the woodwinds and into the full orchestra. The final score selection, "One Night In Mexico", has an overall Barry-ish feel to it. The tone is more troubling to start, with melancholy strings and piano grounded by measured timpani, however, wavering flutes lead back into lighter tones as the groove returns for a wittier, sly closing.

There is not much more to add about the album at this point. Does the album get rated for just the score tracks alone or for the entire package? For Rolfe Kent completists, they must decide if it is worth it for eight minutes of score, but there are some fun song selections to help pad out the listen. The album might be more for someone charmed by the film and thus would like a souvenir of that overall experience, songs and score together, making for a zesty, varied album from start to finish.