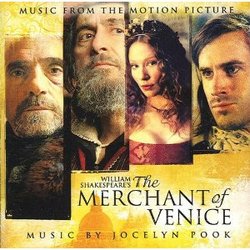 The Merchant of Venice

Review: Merchant of Venice, The

There has long been a debate, at least among followers of film music, as to how a period film should best be scored. Throughout most of Hollywood's golden age, the standard symphonic genre was used no matter when the film was set. But this is a bit of an anachronism (and a large one in cases like Ben-Hur, for example) since the first recorded symphony was not until 1732. Because of this fact, many have argued, a more period approach should be used in historical pieces. Ah, the other side rejoins, but in many cases (again, such as in Ben-Hur) we have little idea of what the music of the period actually sounded like, so what makes one anachronism better than another?

And so the debate rages on. I must admit that I can see both sides' points, but I have cringed through enough ill-conceived pseudo-Medieval or Renaissance music to be wary of the period approach (and don't get me started on the mis-appropriations of the various world traditions). So when I heard that Jocelyn Pook had decided to evoke music of the Elizabethan period through a contemporary lens for Michael Radford's new version of Shakespeare's The Merchant of Venice, I got ready to cringe. You probably know Pook's name for her score to Stanley Kubrick's final film, Eyes Wide Shut. She is a talented composer in many genres, but I imagined the worst for this project.

In some ways, my fears were justified. This score is pastiche. It contains elements from Elizabethan popular music, Gregorian chant, Middle Eastern chant, lute songs sung by a countertenor, and modern strings. All the ingredients are present for a true musical disaster, but happily it never strikes, and I think I know why. Pook was on hand during filming and had to write most of the dances and songs used in the film before commencing work on the full score. This gave her a basis from which to work. She then immersed herself in Renaissance music and used the sounds that resonated with her as an influence rather than attempting to recreate actual Renaissance music. This is a very small distinction, but it means that instead of proclaiming that she was writing period-true music, she was able to proclaim that this was music that fit the film's imagining of that time.

By evoking, rather than recreating, a historical time, Pook was free to draw on elements that have come to symbolize something with which they were never connected. For instance, in many films Middle Eastern chants and instruments have come musically to symbolize Jews in the Medieval and Renaissance periods. By using this trope, Pook was able to add pathos and empathy to Shylock, the most troubling character in The Merchant of Venice. She was also able to use female voices along with male in the Gregorian chant, as in "Blessing of the Boat," a pairing that would have been unacceptable in Catholic Church of the time but serves dramatic purpose. Finally, by utilizing instruments such as the recorder, viols, and the sackbut, she was able to imply a world without faithfully recreating it.

So, has Pook found a successful mediation between the two sides in this debate? Not fully, but it is a step in the right direction. Occasionally her compromises are a bit too jarring, and I found the use of Middle Eastern elements, while successful symbolically, a bit too overdone. But the songs she has crafted are exquisite, especially "How Sweet the Moonlight," which sets the text beautifully and nicely combines the old with the new to create something truly special. Try to find a more beautiful ending of a film song this year than the open duet on the words "sweet harmony." Overall, this is a fine album, full of interesting sounds that you will probably not hear on another score this year. Pook has taken an old debate, approached it with fresh ears, and delivered a new world. Sometimes, that's all you need.