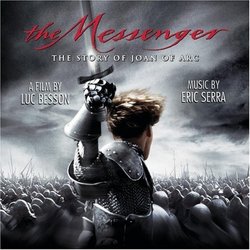 The Messenger: The Story of Joan of Arc

Review: Messenger: The Story of Joan of Arc, The

Composer Eric Serra and director Luc Besson have had a very productive relationship. Having worked together on seven films, including the highly acclaimed La Femme Nikita and The Professional, their eighth collaboration is one that takes a slightly different turn from the previous films. The Messenger: The Story of Joan of Arc is, for the most part, a largely orchestral score, supplemented with some synth effects. Previous scores by Serra have primarily been synth heavy, and it was very interesting to hear his approach to using a large orchestra and chorus.

This film had a plot structure (and overall feeling) very similar to Braveheart. But that is where the comparisons should end. As we start with a young Joan confessing her daily sins to a priest, "Talk To Him" is a calm sweeping orchestral piece that introduces us Joan's main theme about halfway through. Some interesting synth effects bombard us in "Joan and the Wolves", during which a pack of wolves race towards (and past) Joan, who is holding a sword she found in a field. Shortly afterwards, she discovers that her village has been burned by English soldiers. "No Amen" is a rather melancholy piece, again performed solely with an orchestra. The real interesting cues start coming when the plot finally starts picking up in the film. "Chinon" starts right off with a militaristic bass rhythm quickly followed by strings and horns building the tension. "Secrets of a Strange Wind" features some interesting atmospheric effects and backwards samplings - this cue shows up whenever Joan recounts her visions. In the film, it's a rather complex and powerful montage, and the music supplements it well.

The first real action cue on the album, "The Tourelles" brings us a large pounding orchestra with a tense horn theme. Some synth effects laden throughout the cue add to the building tension. "La Hire's Lucky Charm" has a rather sad and beautiful guitar solo, backed by strings. In one of the turning points of the film, ("Armaturam Dei") where the French army basically begins to slaughter the English army at Orleans, Latin chanting begins to build and build, followed by the "Strange Wind" theme. Much of the chanting, both in this track and "The Miracle of Orleans" is powerful, and echoes a little bit of Excalibur - in fact, not since "Charging Fort Wagner" from Glory is a piece of music obviously inspired by Carl Orff's "Carmina Burana" than the climax to the film, "Angelus in Medio Ignis".

One of the more interesting moments in the film occurs after Joan is captured and put on trial - Dustin Hoffman, who plays Joan's Conscience, forces Joan to question her visions, and the music in that sequence ("Anger and Confession", "Answer Me", "The Repentance") provide very good examples of Serra's score. However, one cue that stood out in the film (and is missing from the album), was in this sequence: when The Conscience hypothesizes all of the different ways the sword she found as a child arrived in the field. It's hard to describe, but when you see this sequence in the film, you'll know why I miss it from the album (keeping in mind I'm a sucker for choral work)!

In the recent trend of "end title songs inspired by the film", we are presented with Moa performing "My Heart Calling", which was written by her and Eric Serra. It's a rather good song, and has a really good theme, which I felt was inspired by Serra's score in the film, but didn't seem to directly quote any of the themes in the film. Either way, this was a very nice approach to ending the album (and the film). This album runs about 64 minutes long, and with the exception of the one cue missing that I mentioned above, was very satisfying to listen to. It will be interesting to see how people react to the film- I enjoyed it, as did others, but there are others I know who disliked it. I suppose you'll have to make up your own mind.