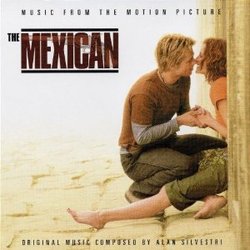 In The Mexican, Jerry (Brad Pitt) and Samantha (Julia Roberts) break up because Jerry has to go to Mexico to pick up a valuable pistol that is (supposedly) cursed. Through a rather twisty series of events, including Samantha being kidnapped, the pistol changing hands, and some double (and even triple) crosses, Jerry and Samantha rekindle their relationship. Directed by Gore Verbinksi (Mousehunt), the film's score took on a rather south-of-the-border flare, composed by Alan Silvestri.

Returning to the same Morricone-inspired style that he used in The Quick and the Dead, Silvestri's score for The Mexican features only a few prominent themes, but they are used to great effect in the film. Beginning with the "Main Title", we can see that this is certainly a nod to A Few Dollars More (and the other Spaghetti Westerns) - with a heavy string section and Spanish trumpet (backed with choir). Another major theme is next heard in "Blame Shifted". A harmonica and guitar based motif (later involving whistling), it represents the conflict in Jerry and Sam's relationship. Once Jerry goes to Mexico, in an amusing sequence, we hear "Oye", a rather fast-paced Mexican song written by Silvestri with Abraham Laboriel.

Some of the more tender moments in the score, such as "Leroy's Morning" and "Airport" use another theme, this one more somber and emotional. It's classic Silvestri, and doesn't really fit into the Morricone-style. (Which is a good thing!) Whenever the tale of The Mexican (the pistol) is told, a hand-cranked low-saturation moviola style is used on screen. This music is typically accompanied by the main theme we heard in the "Main Titles", and works well in the featured track, "The Mexican". Other cues, such as "Thieves" and "A Miracle" add more emotion and depth to the film, the latter reminding me a bit (in the choral moments) of Silvestri's work on The Abyss.

There are a few pop songs in the film, and these are included on the soundtrack. Used primarily as source music while Samantha drives to Las Vegas, "These Boots Are Made For Walking" (Nancy Sinatra), "You're Nobody 'Til Somebody Loves You" and even "The Safety Dance" (Men Without Hats) feature prominently in the film, but do little to add to the story.

Released by Decca Records, the "End Credits Medley" of the film is a nice five-minute long suite that recaps most of the themes heard in the score, and is a nice way to end this 50-minute long album. If you're a Morricone fan, you can't avoid this album. If you're a Silvestri fan, you can't avoid this album either - it's great to hear quality thematic work once again in a major Hollywood film.