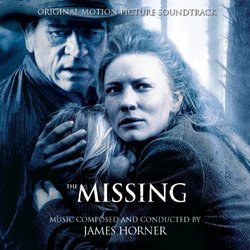 James Horner is one of those composers with a truly recognizable style.  It has changed over the years: Star Trek II doesn't sound anything like Legends of the Fall, but it's still undeniably Horner.  Ever since Braveheart, though, Horner seems to be stuck in some kind of musical rut.  That isn't to say his scores aren't any good - on the contrary, I have found them to be constantly enjoyable, entertaining, and extremely effective for the film.  But there are only so many times I can hear a passage that is strikingly similar to the score before it without getting a tad frustrated.  With The Missing, critics of Horner's work will undoubtedly flock to these moments in the score.  A tragic combination of orchestration, tempo, and even notes, all combine to create that same "sound" that many people love about Horner, but many also hate.  But when looking at any soundtrack, it needs to be analyzed on two levels: how does it work in the film, and how does it work on the album.

The Missing is a Ron Howard film very much in the vein of The Searchers.  Maggie (Cate Blanchett) is searching for her daughter Lilly (Evan Rachel Woods) who has been kidnapped by an Indian witch doctor, and it being taken to Mexico to be sold into slavery.  She is joined on her mission by her estranged father, played by Tommy Lee Jones.  It is a story just as much about reconciliation and family bonds as it is about tracking down a kidnapped person.  Horner manages to capture all of that in his score, and it works exceptionally well in the film.

The soundtrack album starts out with the main titles, and hints at the score to follow.  Flutes, ethnic vocals, and those lush sweeping strings create an emotional connection right off the bat that Horner is brilliant at creating.  "The Stranger" uses wood pipes and chorus to create the same sense of unease as he did in Braveheart.  But it is with "Dawn to Dusk: The Riderless Horse" that the film picks up in the plot, and Horner's score throws the beautiful main theme right at us.  The horns and strings evoke a John Barry feel, combined with Legends of the Fall.  It's Horner doing what he does best.

The problem with the album is that for all the good music on it, it's just too long.  Running nearly 80 minutes in length, this score (much like the film) would have benefited from some extra trimming.  At least the musical variety keeps us interested.  "A Curse of Ghosts" is an atmospheric cue with chanting (similar to Windtalkers), "Kayitah's Death - The Soaring Hawk" is emotionally tragic, and "An Insurmountable Hurdle" has rhythm that amps up your heartbeat.  The last track, "The Long Ride Home" is a rather absurd 16-minutes long.  This is basically the last reel of the film, and includes the emotional conclusion between Maggie and her father, the final fight between Jones and the witch doctor, and the resolution of the entire story.  It can easily substitute as a suite of music from the film - if there was one track to play for someone that encompassed the entire score, this would be it.

I found myself really enjoying the album - the score worked well for the film, and I think it's one of the few films I've seen this year that might have a shot at being considered Oscar-worthy.  Horner's score is going to get a lot of criticism from the same people who don't like his stuff to begin with, and while I have my own issues with the style he seems to be stuck in for over 10 years now, I still can't say that it doesn't grab me every time I hear it.  Truly moving, if a tad long, The Missing is not to be overlooked.