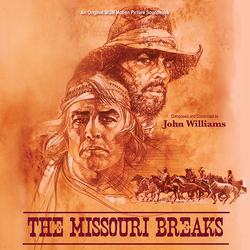 John Williams had already done big, brash, outdoorsy Americana before with The Reivers and The Cowboys. But The Missouri Breaks wasn't big and brash, and so required a different kind of score—smaller in scale, but one that would capture the characters and the drama as well as the period and the feel of the film. And, of course, Williams delivered a perfect score (albeit atypical for him during this period), mostly composed for guitars, harmonica, percussion, and a handful of other instruments.

Williams never wants for coming up with an instantly memorable and beautiful theme and The Missouri Breaks has a beauty in its love theme—never overused, always right. His main title music sets the mood with tense bass notes, and off-kilter harmonica and guitar—it's wonderfully evocative and haunting. There are up-tempo infectious cues and cues for Brando that are really off-kilter. It's Williams doing what he did (and still does) better than anyone, and it's a score that's completely unique to him.

There was an LP release at the time of the film—that was a re-recording, and Williams, as he did frequently, arranged the music differently than the film, to work as a cohesive thirty-six minute album. That LP release was issued on CD, first by Ryko, who added three bonus tracks from the original film cues—the first time those had been heard outside the film (although, interestingly, those three cues contained no music that wasn't in the re-recording)—and then by Varese Sarabande, which was a virtual clone of the Ryko CD.

For this CD release, we are really pleased to present all of the original film tracks for the very first time—their world premiere release—from the original superb-sounding session masters. It's leaner and meaner than the re-recording, and a completely different listening experience. A handful of cues went unused in the film itself, but we've included everything for this release. We also are including the original LP presentation but we've gone back to the original album masters so we could be at the original source for the best possible sound. So, here, at long last, is the complete original soundtrack cues for The Missouri Breaks. They've been a long time coming, but we hope you'll find they've been worth the wait.