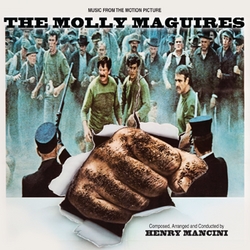 The Molly Maguires was a big-budget drama from Paramount Pictures, with powerhouse stars, Sean Connery, Richard Harris, and Samantha Eggar, a terrific director, Martin Ritt (Hud, The Spy Who Came In From The Cold and many others), and the screenwriter of Fail Safe and John Frankenheimer's The Train, the great Walter Bernstein. The film takes place in the Pennsylvania coal country in 1876 and is loosely based on the true story of a small band of Irish coal miners/terrorists called The Molly Maguires.

For the film, composer Henry Mancini composed one of his finest scores, filled with lush melodies and expert evocative themes. Whether depicting an early morning at the mines (the astonishing opening cue), or the terrorist activities, or the blossoming love between Eggar and Harris, Mancini's score is right up there with his greatest, including such masterpieces as Breakfast at Tiffany's, Charade, Days of Wine and Roses, Hatari!, Two For The Road, and many others.

The Molly Maguires' score was originally issued on LP, and made its CD debut on Bay Cities in the early 1990s. For this new release, we had access to the original multi-track tapes stored in the Paramount vault. We are thrilled to present the entire score as recorded by Mancini, newly mixed in superb sound, and which features several cues that were left off the original album.

When the tapes were pulled for The Molly Maguires, we were delighted to find that the tapes for Charles Strouse's original score were there—after a disastrous preview, it was decided his score would be replaced. Strouse, most well known for his Broadway musicals, had dabbled in film scoring with Bonnie and Clyde and The Night They Raided Minsky's. Strouse's complete score is included on the CD. The music is very interesting, and it's fascinating to hear Strouse's completely opposite approach to the one Mancini would ultimately take. There is some truly lovely music here.

This release is limited to 1500 copies only.