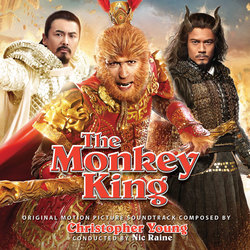 For the 2014 Chinese production of The Monkey King, composer Christopher Young composed a breathtaking, epic score. Hired well in advance of the visual effects completion, Young wrote most of his music without the benefit of finished effects shots or a locked film. Armed with this creative freedom, Young crafted an expansive score of a type not commonly seen in present-day Hollywood. The music brims and bristles with lush melody, ornamenting the ethereal beauty and majesty of the various gods, fueling the stormy wrath of the Bull Demon King, and charting Sun Wukong's journey from a playful, wide-eyed innocent to a towering avatar of fury and divine retribution.

Young infused the already sumptuous score with an array of Asian colors and textures, including ehru (a bowed Chinese fiddle), guzheng (a type of Chinese zither), shamisen (a three-string Japanese lute derived from the Chinese sanxian), pipa (a four-string pear-shaped Chinese lute) and assorted winds and percussion.

The sessions for The Monkey King took place at the Slovak Radio Concert Hall, with Nic Raine conducting the 80-piece Slovak National Symphony Orchestra and Young's frequent collaborator Allan Wilson conducting the 40-member Lucnica Chorus. To present The Monkey King on album, Young drew inspiration from English composer Gustav Holst and his famous orchestral suite The Planets, arranging his cues into ten selections titled after Chinese deities and other prominent characters from the film.