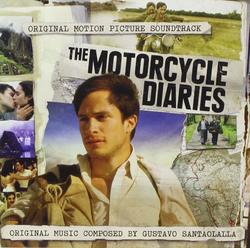 Walter Salles' film about the early years of Ernesto 'Che' Guevara is basically a road movie about two friends who travel across South America. Ernesto, a young medical student at the time, (played by Gael Garcia Bernal) and his buddy, Granada, a biochemist, set off on an old motorcycle to explore their continent in true bohemian style. Their destination: a leper colony in Peru where they plan to do a brief internship. In typical road movie fashion, the journey they undertake doesn't quite unfold as planned, and many life lessons are learned along the way. By the end of their often times comical journey both men have irrevocably changed. We see and understand the seeds of idealism and the sense of injustice that are planted in Ernesto's character.

Providing the score to Salles' road movie is the gifted Argentinean musician/producer, Gustavo Santaollala. As in his previous score work, the primary instrument here is the guitar – classical, flamenco, and electric. Santaollala performs most of the music himself and is accompanied by members of the Argentinean rock group Bersuit. With various percussion instruments, a flute and violin, the score has a very earthly texture to it. There is an upbeat and driving main theme that is repeated a few times, particularly when Ernesto and Granada leave one place and head out to the open road.

Since a good portion of the road trip undertaken by the young protagonists takes them into rural areas, some of the music has roots in the indigenous cultures of Latin America, which never detracts from the overall feel of the score. He sublimely takes us from the suburban sprawl to the rural countryside, to the open road and to vast beautiful vistas. The tone for where the journey will take them emotionally is set early on with brief cues expressing a soulful melancholy as the two young men prepare to embark on their trip. As the journey begins with "Apertrua", the music's tone shifts to reflect their wide-eyed enthusiasm and quest for adventure. On "Zambita", Santaollala uses a distorted electric guitar to beautifully convey a feeling of friendship between the two and the people they meet. On a score where most cues range between 1-2 min in length, it, thankfully, is one of the longer ones as I found myself repeatedly hitting the rewind button on that one. It's a simple melody that works its way into your soul.

Along with cues that are very quiet and ambient, Santaollala mixes in some festive musical cuts which are featured as source music in the film. Also included is a cut ("Jardin") from his 1998 solo album Ronroco which is a bit strange because it has more of an Eastern flavor to it. No matter; Santaollala still makes it work and it flows together with the rest of the score just nicely.

With Santaollala's guitar as a guide, the listener is taken on a journey through different musical landscapes without any missteps. Unlike his stripped down and sparse scores for Amores Perros and 21 Grams which sometimes left the listener wanting more, the score for Motorcycle Diaries clocks in at a decent length and allows the composer more room to stretch his musical wings while working within the confines of a film score.