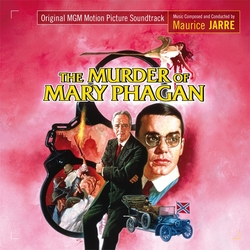 The Murder of Mary Phagan

Music Box Records presents the world premiere release of Maurice Jarre's score for The Murder of Mary Phagan, a 1988 American TV miniseries that told the tragic, true story of Leo Frank's arrest and trial for the murder of 13-year old Mary Phagan in Atlanta, Georgia on April 26, 1913. The film's subdued but consummate musical score was the work of multiple Academy Award-winning composer Maurice Jarre (1924-2009) - quite a coup for George Stevens to land in his pursuit of a feature-film quality miniseries. But unlike the solo-synth scores that were prevalent throughout the decade, Jarre integrated his synths with his orchestra, recording the electronic instruments live on the scoring stage with the orchestra. The result is an engaging hybrid score that has the organic symphonic warmth flavored with unique electronic textures that gave the Mary Phagan score a quite remarkable sound palette. The soundtrack debut of The Murder of Mary Phagan is presented in stereo from pristine-condition from multi-track session tapes. The album includes Jarre's complete score as well as dance music standards of the period heard as source music on the soundtrack, arranged by Thomas Pasatieri (who also composed an original piece). The album includes an 8-page illustrated booklet featuring liner notes by Randall D. Larson who discusses the film's background and examines Jarre's little known score and its thematic architecture in detail.