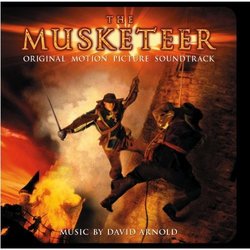 In the mail about five days ago, I received a LensCrafters coupon that included a free eye exam and a healthy rebate on a new pair of glasses. So after viewing the eyeball-gouging photographic atrocities of Peter Hyams' unbelievably inept The Musketeer, I'd like to personally offer said coupon to the director-cum-cinematographer who counts End Of Days and Sudden Death among his other mistakes. Believe me, he needs it that badly.

With all the polish and style of a Lumiere Brothers gag reel, the film stars lightweight newcomer Justin Chambers as the bastard son of Leonardo DiCaprio and Chris O'Donnell (who both made their own French swordplay films... obviously a conspiracy), Mena Suvari in the thankless role of the perennially half-naked wench, and Tim Roth again playing Tim Roth. Now I'm not one to flirt with undue hyperbole, but you've simply got to marvel at a film so bad it makes you ponder all the things that Cutthroat Island got right. Not only is the best scene, a sword fight in a room full of ladders, in the trailer, but it is also featured completely intact in the chop-socky import Once Upon A Time In China.

One nice surprise buried way under an obnoxious sound mix is David Arnold's comparatively fine score, probably written while reading the Dumas novel. It is at-turns big and bold and full of brass, much like his highly popular Independence Day score, while also showing off a sparkling low-key romanticism that caught me off guard at first but turned out the be the best stuff on Decca's nearly fifty minute album.

We begin with the "Main Title", and it's clear that the temp-track expected nothing less from poor Arnold than John Williams' classic Superman. The recent 007 composer is almost up to the challenge, but sadly the theme ends up more heroic-for-heroics-sake and never quite catches on (more akin to Williams' The Patriot, ironically enough). "I Will Find Him" restates that same theme in a much more agreeable, pensive mode with occasional dashes of orchestral frenzy to depict the obligatory murdering-of-our-hero's-parents.

From that point on until the album concludes, you've got two basic musical pots to dip into. First, there is the crock full of swashbuckling action music, with blaring brass clusters, furious strings, and pounding percussion.  Early tracks such as "Fight Inn" and "Jailhouse Ruck" are fairly exciting stuff, sure, but there's nothing terribly memorable about any of it. It's a bit like the aforementioned Cutthroat Island, but frankly John Debney seemed to be having a lot more fun with his crappy little toy movie. Arnold's key objective here seems to be trying to cut through the impenetrable sound mix. On disc, the sheer force of some of this music may make you want to duck and cover. Getting a little more attention than some of the other action material ("Coach Chase" and "Scaling The Tower" being two capable, but again undistinguished, cuts) is the piece for the famed "Ladder Fight". Frantic strings slice away over a menacing ostinato, making for a true album highlight.

The second basic style here is the more understated stuff to be played under scenes of good actors trying to sound dignified while spouting cringe-inducing dialogue. "Prepare Duschamp For Hell" and "Febre" feature rather Michael Kamen-ish dissonances in underscoring Tim Roth's umpteenth slimy British villain. "D'Artagnan And Francesca" and "Down By The River", however, deal with the film's romantic interludes and are my personal favorite cuts on the whole album. Along with delicate orchestrations by Arnold's talented conductor Nicholas Dodd (featuring acoustic guitar), these pieces have a real shimmering sweetness to them.

David Arnold is a huge talent, there's no doubting that. But he's fighting an uphill battle here. And a lot of times he comes up with a real winner of a score, especially when you consider the trash it was written for. (In fact, this may be the best score for the worst movie since Cliff Eidelman's Columbus: The Discovery.) On the whole, though, The Musketeer never fully lives up to the promise of its source material on any front.