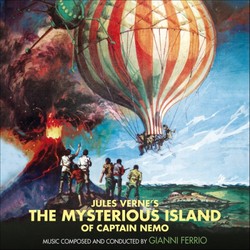 The Mysterious Island of Captain Nemo

At last! Quartet Records, in collaboration with Cinevox Records and the Gianni Ferrio Estate, is proud to present a remastered and expanded release in a limited edition 2-CD set of this famous score by Gianni Ferrio.

Ferrio provides a classy and colorful, dynamic score, dominated by a memorable theme and gloomy action passages. It is full of enigmatic and suggestive romanticism and one of the most deservedly famous scores of his career. The collaboration of I Cantori Moderni di Alessandroni and the fascinating voice of Edda Dell'Orso is one of the most appealing aspects of the score, but not the only noteworthy feature in a work generous in thematic diversity with many delights to be discovered.

The soundtrack album of The Mysterious Island of Captain Nemo was released in 1973 in Italy by the Cinevox label with 12 tracks and a running time of 37 minutes. In 1997 the premiere CD release (in Germany only) included the album program plus five minutes of unreleased music found on the Cinevox album masters. Collectors around the world have sought the complete score without success—until now.

This special double-disc set, carefully mastered by Claudio Fuiano and José Luis Crespo, is possible thanks to Alba Ferrio, the composer's widow, who fortunately kept the complete mono sessions of the score in her husband's private archives. Now, thanks to this recent discovery, this project has become a reality. Even though the tapes were slightly damaged (specially track 22), we are lucky that it has all survived.