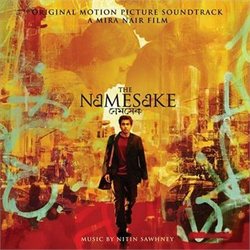 I had the chance to attend the preview screening of The Namesake in Montreal a few days after its soundtrack landed on my proverbial desk. It sounds like a silly thing to say but it really reminded me of how much more a soundtrack can be appreciated when one has seen the movie for which it was assembled. I say it sounds silly because that is the main function of a score and it seems foolish to pretend a score can be fully appreciated without ever having heard it in the context of its film. However, soundtrack labels churn out more CDs than ever before and it becomes impossible for a reviewer to hear all of this music in its proper context. My initial feelings towards The Namesake soundtrack prior to having seen the movie was that, while the score was good, its songs were very eclectic and they took up too much of the album\'s running time. After seeing the movie, the score feels even better and, while I still believe too many songs were crammed onto the album, these songs have begun to mean something and I can appreciate them better.

The movie itself is fantastic. It is the story of one woman in the Bengali region of India, Ashima, and it begins and ends with her melismatic singing, which can be heard in "The Namesake Opening Titles" and "The Namesake Reprise". Her theme becomes the backbone of the score and is heard almost exclusively on the acoustic guitar, which is the main voice of the score. Ashima\'s marriage to Ashoke, a Bengali man who has been living in New York for the past two years, is arranged by the parents of both parties and she flies to America with her new husband where she tries to adapt to the new way of life. "First Day in New York" is a fine exposition of Ashima\'s theme with a soft, fluttering bansuri accompanying its melody. Even in the States, traditional Indian instruments are overlaid on top of the acoustic guitar to remind us of Ashima and Ashoke\'s world, such as in "Airport Grief", where the bansuri forms a duet with the guitar, speaking out Ashima\'s theme, and the tabla slowly backs the theme with a gentle Indian rhythm. The couple soon raises two children, one of them named Gogol (played by Kal Penn), and their American upbringing starts to taint the music with a rock effervescence which can be heard in "Mo\'s Affair", where rock drums, electric guitars, and a bass take center stage while traditional Indian elements dance around them. When the whole family goes back to India after Gogol\'s high school graduation, the streets of Calcutta start teeming with life to the sound of State of Bengal\'s minimalist techno track "Flight IC408". This modernization can also be heard in "The Chosen One", a short rap song with an Indian-inspired synth melody heard when Gogol gets his head shaven in New York.

The album does feel heavy with the weight of songs which are often only heard in small snippets in the movie. To Western ears unaccustomed to traditional Bengali music, songs like "Jhiri Jhiri Choyetali" (heard in the movie as TV source music) and "Boatman\'s Song (trad.)" (heard during a funeral scene in India) will be difficult to appreciate on the album and will create a jarring listening experience. My favorite songs on the album and quite possibly the most approachable from the perspective of a Caucasian who has never stepped foot in Asia are "Ye Mera Divanapan Hai" and the two end credits songs, "The Same Song" and "Falling", the latter having been written by the score composer himself, Nitin Sawhney. His score is quite beautiful and understated, not unlike Mychael Danna\'s approach for Monsoon Wedding and Water yet a bit more stripped and centered on the sound of the acoustic guitar. I wish more cues from the score had been included on the album; I also wish there hadn\'t been a song constantly interrupting the flow of the instrumental tracks. The way the album has been sequenced and the predominance of songs on it both relegate Sawhney\'s score to second fiddle status, so to speak, but the score should not be easily dismissed. The Namesake boasts a great soundtrack and, while the album is unevenly balanced, it should please fans of quiet, introspective and emotional scores while also offering a musical platter of diverse Indian and Indian-inspired songs.