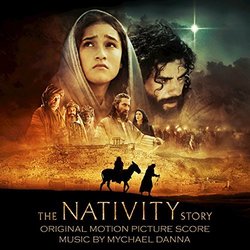 Rarely has a film score been this rich. I was reminded of Elliot Goldenthal\'s mad steps through the history of classical music in Interview with the Vampire, but also of Howard Shore\'s finely crafted and detailed scores to The Lord of the Rings, overflowing with a musical history both alien and strangely familiar. If anybody could score The Nativity Story, a movie about one of the most celebrated viviparies in the world, it had to be Mychael Danna, whose passion lies in early music and whose thorough research habits are starting to become more and more apparent. Danna\'s music for the movies has shown an amazing versatility: the gamelan compositions of The Ice Storm, the medieval music of The Sweet Hereafter, the Moroccan energy of 8mm, and the Indian improvisations of Water are all testaments to his integrity and respect of other cultures. Here, his score goes beyond the told story: it encompasses both the seed and the resulting plant, scoring the consequences of the story into a surprisingly coherent whole.

There are many layers to this musical journey and the detailing is astounding, but three components to the music are fairly evident. Danna uses an array of medieval and early Renaissance instruments to accompany Mary\'s internal journey. The naive, breathy sound of the recorder and the scratchy vielle, the pre-Baroque ancestor of the violin, are generally used to give voice to Mary\'s Theme, a hummable melody that starts on the tonic and quickly returns to it through a short descending line. The theme then drops by a semitone, hinting at the Middle Eastern sound, before returning to the tonic and finally settling on the sixth, which brings a level of warmth to the melody. This theme reaches its apex in the middle of "A Star Shall Come", where it is stated by modern violins at the top of their range accompanied by a choir. The cue subsequently calls for a female vocalist and the vielle to duet over a powerful lullaby.

The second layer is formed of instruments opposed to Mary and Joseph\'s journey. Here, Danna uses both the Turkish and the Persian ney flutes, one of which had been featured prominently as the piéd piper\'s flute in The Sweet Hereafter. The deeply breathy sound of these instruments also serves to ground the score in its locale. Unlike in The Sweet Hereafter, the neys are not prominent players but merely provide one more color. The Romans are represented by the instruments of their times, reminding the listener that their music was distinctly influenced by the Middle Eastern basin and only mildly recognizable as ancestors of the Western sound. The horns bellow in dissonance and the belligerent drums are hit in disturbing cascades in cues such as "Veni, Veni Emanuel" and "Census".

The final layer bathes the score in a spiritualness that is not cheesy but respectful of the history and tradition of Christian music. One of the Cantigas de Santa Maria is used as a recurring motif in the first half of the score. It is a comforting song often introduced and accompanied by a plucked string line. "Corde Natus Ex Parentis" is a piece by Prudentius which must have been composed right before the Middle Ages. It is a cento, meaning a poem using rearranged lines from other poems and, while it was not composed as a liturgical hymn, it has been adopted as such many years after its composition. It sounds to my ears like the plainchants of Hildegard of Bingen, particularly "Columba aspexit", which were composed five hundred years later. Two more recognizable carols are used by Danna: the "Carol of the Bells" is used as an action-driving ostinato at the beginning of "Is There a Place For Us?" and a Latin version of "Silent Night" calms down the proceedings in "Silens Nox" after the powerhouse closing of "In Rosa Vernat Lilium" for male choir, string ensemble, and boy soprano.

I could continue to describe The Nativity Story cue by cue but it would be pointless. The bottom line is that Danna mixes all these elements - early music instruments, Latin carols, Middle Eastern sounds, traditional string ensemble harmonies, and choir work - into a surprisingly coherent score. The Nativity Story doesn\'t sound like a chimera; rather, it contains hints of the entire musical tradition derived from Christianity into a flawless whole that is neither jarring nor incoherent. While I believe Danna\'s score to Water was even more touching and personal, The Nativity Story is definitely more impressive and serves as a shining beacon to illuminate a talent that has been germinating for a number of years. Here\'s to hoping The Nativity Story expands Danna\'s usual and restrained circle of admirers into a much wider and much deserved audience.