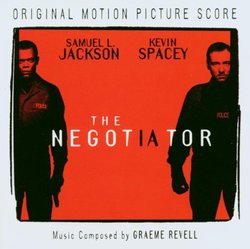 In The Negotiator, Samuel L. Jackson plays a police hostage negotiator forced to take his boss hostage when he realizes he is being set up by Internal Affairs. He requests his own negotiator, played by Kevin Spacey. With a film full of tense moments and dramatic action, a score that would enhance (if not amplify) those moment was needed. The producers turned to composer Graeme Revell, known for his work on The Crow, The Saint, and The Craft (sense a pattern?) to write such as score.

The score to The Negotiator was released in August through Restless Records, and if you saw the film, you no doubt took notice of this very powerful and engaging score. The movie itself was a pleasant surprise, due to the ineffective marketing campaign I was expecting a film a lot worse than the one I saw. There was a lot of dramatic tension in the score, and some of it reminded me ever so slightly of "The Saint".

Stylistically, this score tends to draw closer to the type of scores typically produced at Media Ventures – it has the same percussionist approach to scoring. There is a bit of choral work, which definitely adds to the emotional impact of many scenes. The theme is not memorable enough to hum, but it is definitely prevalent throughout the score.

Some of the string work is powerful stuff – similar to the string work Trevor Jones used in G.I. Jane (coincidentally another score which sounds like it came from Media Ventures). At just a hair over 41 minutes long, this is a score that worked really well in the film, and also provides an enjoyable listening experience on its own.